Last week, we reported on perhaps the worst sessions of Chance Kornuth’s Galfond Challenge. Up against Phil Galfond, the Chip Leader Coaching owner was down to the tune of €280,000.

The comeback may well have only just begun, as in this week’s sessions in the Galfond Challenge, Chance Kornuth has wiped out that debt and moved into a slim lead in the contest, as he was happy to tell his fans about on social media.

Kornuth’s comeback hasn’t just been credited as terrific by poker fans, pundits and the media. Galfond himself has called out the bravery of his opponent taking him on. With any victory, no matter how slim, Kornuth would win a million euros, having agreed to a 4:1 side-bet that roughly reflected the Poker Shares odds on offer at the start of the battle.

While Kornuth, if he loses, would have to hand over €250,000, Galfond’s bounty is a cool million and he admitted on Twitter that he may end up paying this out. He did add, however, that Kornuth was not the only professional poker player that he offered those odds to.

I’m a generous guy – I offered a lot of players 4:1 or better! @ChancesCards was the only one brave enough to take it. #FortuneFavorsTheBold? https://t.co/CYAjanNZ7R

Kornuth’s comeback began on Day 10 of the challenge, when he booked a win for a little under $80,000. He repeated the trick on Day 11, thanks in no small part to getting it in with made hands against huge draws for Galfond. Marginal play-outs and big swings are the make-up of Pot Limit Omaha and Kornuth was landing on the right side of those swings.

On Day 12, Kornuth saw his opponent brick more draws, especially between turn and river, and on Day 13, found himself on the right side of some cold decks for the host with one particular late hand seeing Kornuth holding jacks and threes, with a flop of 8-3-9 including two clubs, of which he had a jack and three in, pop up. 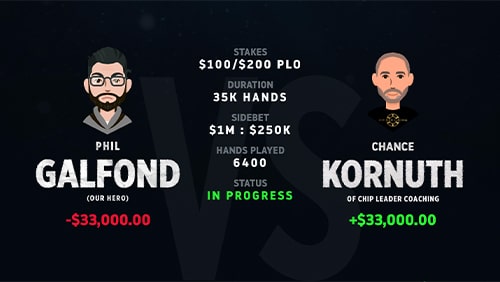 After riding out the last few hands, Kornuth’s recovery was complete and his slight lead of €33,000 going into the next session will fill him with hope. Having played 6,900 of the 35,000 hands to be played, there is still a lot of poker to be played, but having been behind for four weeks since September 24th, Kornuth is finally in the lead.

It is not one that the former WSOP bracelet winner will want to relinquish any time soon.