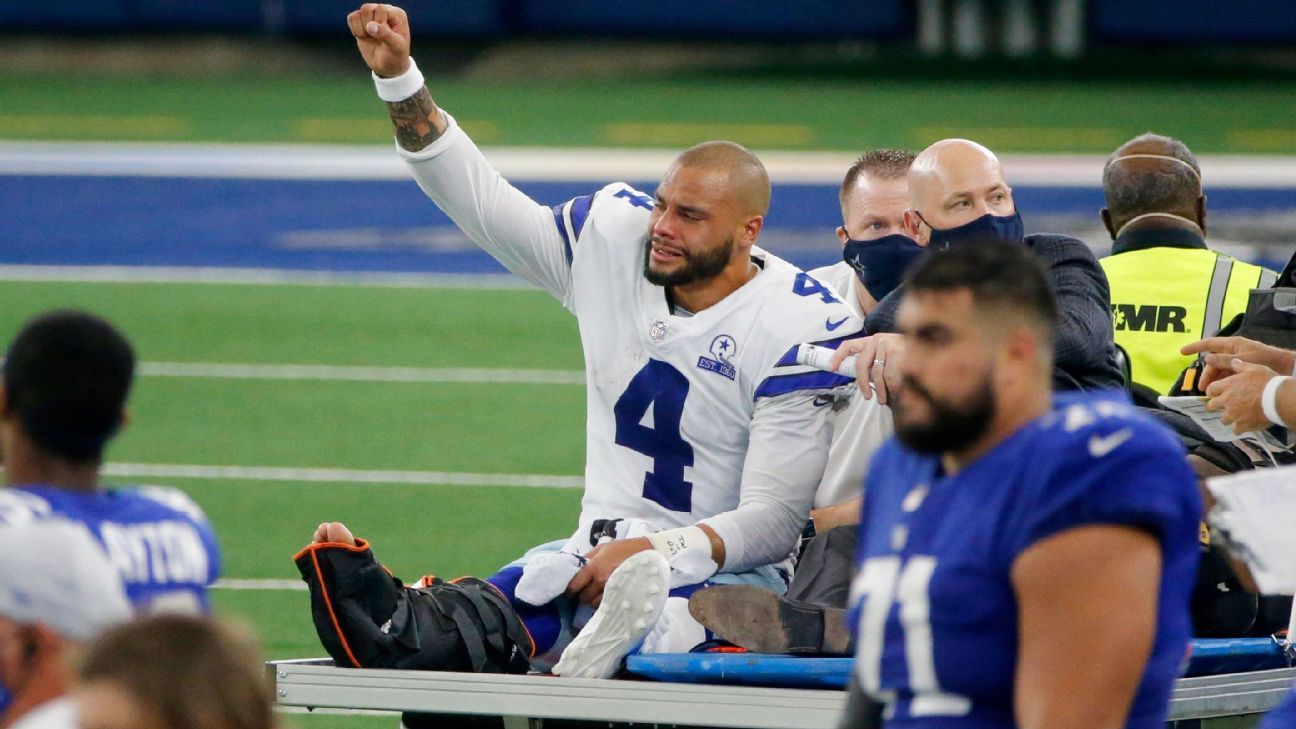 Dallas Cowboys quarterback Dak Prescott said he is “ready to start this road to come back” and is in “great spirits” after having season-ending surgery for a compound fracture and dislocation of his right ankle.

“Just want everyone to know that I’m doing well,” Prescott said in a video posted to Instagram on Thursday as he was heading to the doctor to see his leg for the first time since having surgery. “I can’t thank you enough for your love, your support, your prayers over the last few days. They’ve been more than overwhelming.

“Just knowing that I have that much love and support out there makes a huge difference. I’m in great spirits.”

Prescott was sent home from the hospital Monday afternoon after undergoing surgery Sunday night. A source said Prescott, 27, is facing four to six months of rehab, but Cowboys coach Mike McCarthy said, “As I’ve found out in my short time here, he’s going to challenge any timeline.”

The injury occurred while Prescott was being tackled by New York Giants defensive back Logan Ryan on a 9-yard run with 6 minutes, 33 seconds to play in the third quarter. The quarterback was in tears as he was carted off the field with his right leg in an air cast.

“So I’m just ready to start this road to come back,” Prescott said in his post Thursday. “I know this little adversity is just going to be another chapter in the book. I’m excited to move forward and write it.

“I’m looking forward to this football season, seeing the game from a different perspective and supporting my teammates and those around the league that need it. I’m just excited — excited for God’s purpose and God’s plan. I know it’s bigger than anything that I’ve seen or could imagine. I’m trusting him. My faith is doubled down more than ever.”

Prescott was at the team’s practice facility Thursday and met with teammates and coaches.

“You just see the reaction everybody has that he’s here, I just think that speaks volumes about him as a man and just the electricity that he brings to our football team,” McCarthy said.

McCarthy, however, said Prescott’s absence will hit home a little more when the Cowboys take to the practice field for the first time without their starting quarterback.

“I think you’ll have that moment when you get out there. I think that’s only natural,” McCarthy said. “Unfortunately, I’ve been through it before a couple of times. But on a personal note, it was great to see him today.”

McCarthy said it’s too soon to see how much Prescott can still be involved in terms of helping with the team’s preparation.

“The most important thing for him, at this point, is just get comfortable and try to get some sleep,” McCarthy said.

Prescott is set to be an unrestricted free agent in the offseason after playing on the $31.4 million franchise tag in 2020. The Cowboys can use the tag on him again next March, which would cost $37.7 million, or allow him to test the free-agent market.

The Cowboys and Prescott’s agent, Todd France, were unable to reach an agreement on a long-term deal before the July 15 deadline, which meant Prescott had to play this season on the tag. The sides can resume negotiations after the season.

The Cowboys’ offer to Prescott over the summer included a $50 million signing bonus and around $110 million guaranteed, but the length of the deal was a sticking point. The Cowboys wanted a five-year deal, while Prescott was seeking four.