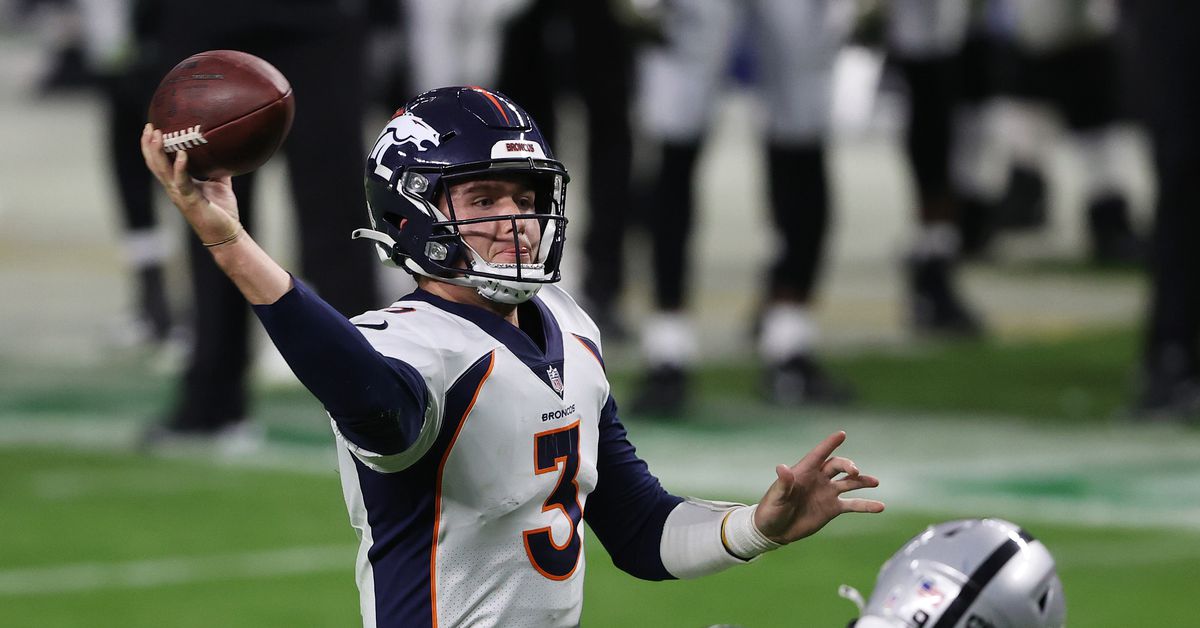 I’m not sure where to go with this. The Broncos did the one thing you absolutely cannot do. They were humiliated by the Raiders. That will cause Broncos Country to turn on you faster than the defense was getting to Drew Lock in Las Vegas.

I want to be positive. I want to find an Orange and Blue lining, but that’s Ian’s job in Winners and Losers. Then again, I’m not sure how much you can really shine this turd. As Ian St. Clair and I discussed on the MHR Radio postgame recap, this was just an awful showing by the offense.

I’ve preached patience here when it comes to Lock. I completely understand if that idea has begun to fall on deaf ears. He was bad against the Raiders. He was running for his life, and his jersey had more green than white by the end of the game, but he was bad.

Four interceptions is unacceptable. Chucking and praying isn’t going to get it done in the NFL. All of his picks could have been avoided. Even the last one, which Nick Kwiatkoski snagged out of the air in Odell-like fashion.

The defense did all they could to keep Denver in the game. And I’d be lying if I didn’t think a little second half magic was on the way. If it was, it must have got lost on the strip, playing blackjack.

The offense is going home down an entire mortgage payment, and there is plenty of blame to go around. But it’s hard not to look at Drew Lock and wonder if he is ever going to figure it out.

You can blame the offensive line for being terrible. They were. You can get mad about Pat Shurmur being bad at his job. He is. You can be fed up with Vic Fangio’s lack of institutional control. He has very little. You can blame injuries, and covid, and Tom McMahon, and the Easter Bunny. It still all falls to Lock.

This game, above all others, shows his regression. And I’m still not bailing on the kid. He has talent. He has the right attitude. He has the desire to get better. But I am not blaming people who are bailing.

Was there ever a play that Lock didn’t have a defender bearing down on him? Was the running game ever able to establish anything? Is Lock trying to process a brand new scheme without the benefit of a real offseason? Is the rest of the offense also struggling with that new scheme?

Does any of that matter right now? No. Not after a loss to the Raiders.

The problem, however, isn’t the present. The problem is the future. What the future holds. It’s time for Broncos Country to face a couple facts. Peyton Manning is not coming to save the day. Trevor Lawrence and Justin Fields are not going to be around when Denver picks in the draft. Fangio and Shurmur are probably going to get one more crack at this.

So, the future is the next seven games, and probably more.

If you see an island, and want to swim for it, I don’t blame you. If you want to stick around and see if Drew Lock is the second coming of Josh Allen, that’s great, too.

What we all know, and what we were reminded of during that Week 10 debacle is that losing to the Raiders isn’t just bad, it’s unacceptable. Being humiliated by them? I’m not sure I have the words.