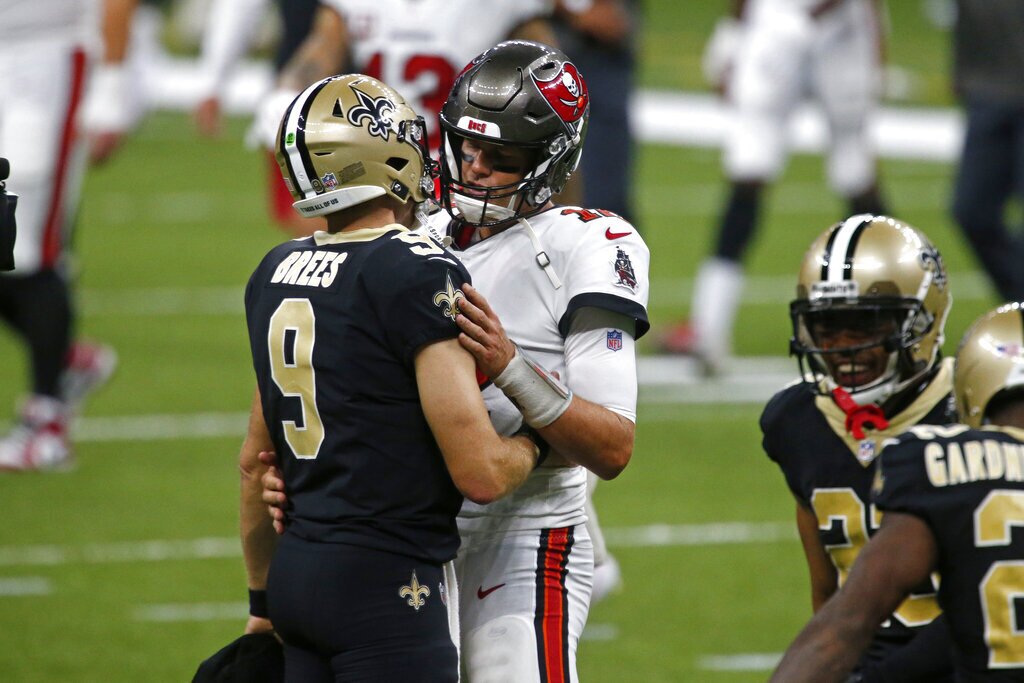 Tampa Bay converted just ONE of their five red zone trips and still, somehow, Tom Brady passed for nearly 400 yards, two touchdowns with no interceptions as the Buccaneers held off the Football Team, 31-23. Washington’s defense and play of Taylor Heinicke allowed the football team to cover the +10 to drop Tampa Bay’s ATS record to 9-8.

For years, the Saints offense and Drew Brees were dripping in accolades and admiration. New Orleans defense is now the unit opponents fear. The Saints “D” allowed the Bears to convert just one third down all game and New Orleans dominated time of possession nearly 2-to-1. Sean Payton’s 21-9 wild card victory wasn’t flashy, but covered the spread to improve their season ATS record to 10-6-1.

New Orleans opened as 5.5-point home favorites, but that has since peeled back to Saints -3 at most online sportsbooks we track as some money likely came in on Brady to beat Brees in his third attempt. The Buccaneers moneyline opened at +155, while the point total opened at 49 before a notable bump up to 52.

New Orleans and Tampa Bay combined for 57 points in their first meeting, but just 41 in their second as the Buccaneers laid a big fat Sunday night football egg.

The Saints won the season opener over the Buccaneers, 34-23. New Orleans picked Brady off twice in that contest that came after an abridged training camp and no preseason games. It was truly difficult to gauge the quality of ANY team back in Week 1.

New Orleans traveled to Tampa in Week 9 and punched the Buccaneers in the jaw. The Saints scored touchdowns on four of their first five drives as Tom Brady and the Buccs offense waived the white flag early with 194 total yards and just three points.

Can New Orleans go 3-0 against the Buccaneers this season? After dissecting the Tampa Bay-Washington box score, noting the lingering issues the Buccaneers continue to have on defense, the fact Taylor Heinecke passed for 300+ yards and that it was a one-score game, late, leads me to believe the Saints efficient offense combined with an elite pass rush keeps Brady uncomfortable Sunday night.