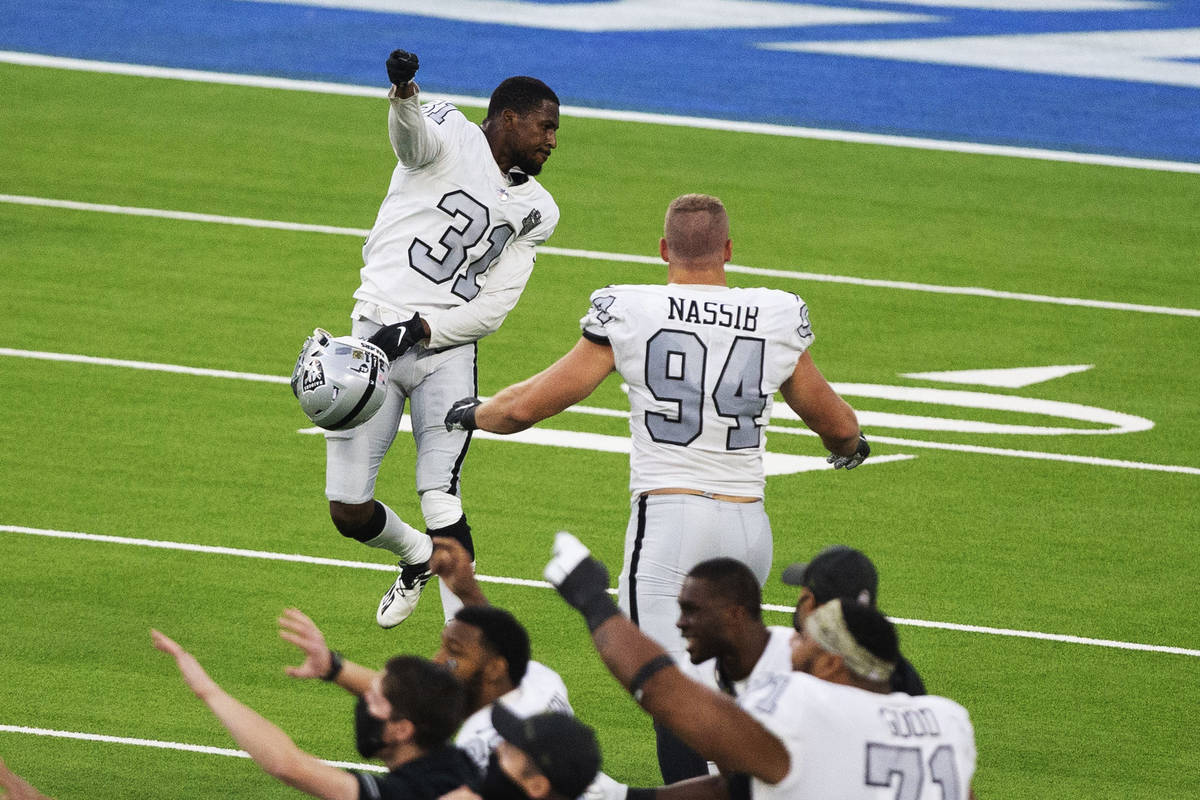 The final play of the Raiders-Chargers game resulted in a mid six-figure swing at BetMGM sportsbook in favor of bettors, and that number was much higher when taking all Las Vegas books into account.

“A huge amount of money changed hands on that play,” Sunset Station sportsbook director Chuck Esposito said. “That last play, when they overturned that call, was probably one of the loudest roars that I’ve heard this year.

“Respected play and the public was all over the Raiders.”

Las Vegas, which opened as a 3-point underdog and closed as a 1½-point favorite, held on for a 31-26 win and cover when Donald Parham couldn’t hold on to a 4-yard touchdown pass from Chargers quarterback Justin Herbert as time expired.

The play was ruled a TD on the field but was overturned on replay, which showed Parham lose the ball as he went to the ground. A BetMGM bettor in Las Vegas won $100,000 on a straight bet on the Raiders.

There was sharp action on the under earlier last week, but the game went over the total of 52½ as the Raiders ran their over-under record to 6-1-1 and the Chargers went over in their fifth straight game.

“It was our best day of the year,” MGM Resorts director of trading Jeff Stoneback said for the second consecutive week. “The two really big games were the Bills beating the Seahawks and the Dolphins beating the Cardinals.

A William Hill bettor needed Pittsburgh to defeat Dallas to cash a $4,000 seven-team money-line parlay that paid $438,000. The gambler hit the big ticket, but the Steelers, 14-point favorites, made the bettor sweat before escaping with a 24-19 victory.

Pittsburgh also was the most popular pick in the Circa Survivor contest, in which 104 of the remaining 330 $1,000 entries selected the Steelers, who trailed 19-9 entering the fourth quarter.

After Cowboys quarterback Garrett Gilbert threw an interception in the end zone early in the fourth quarter, Pittsburgh scored a field goal and TD on its next two possessions to take the lead. Dallas drove to the Steelers’ 23 in the final seconds, and Pittsburgh money-line bettors couldn’t exhale until the final play, when Gilbert’s pass to CeeDee Lamb fell incomplete in the end zone.

The Steelers improved to 8-0 for the first time in their storied franchise history. The Cowboys covered their first game (1-8) of the season.

“The Cowboys came to play, and the Steelers probably thought they’d walk in and walk out,” Westgate sportsbook vice president Jay Kornegay said.

Half a million on Saints

BetMGM had a big day despite a bettor at The Mirage making a $500,000 money-line wager to win $775,000 on New Orleans shortly before kickoff of “Sunday Night Football” at Tampa Bay.

That bettor never broke a sweat, as the Saints scored TDs on four of their first five possessions en route to a 31-0 halftime lead.

“It doesn’t matter how good Russell Wilson is and how many points they score,” Esposito said. “You can’t put Seattle as an upper-echelon team because they can’t stop anybody.”

Trying to figure out Cardinals

The Dolphins scored a defensive TD for the second straight week, and Tua Tagovailoa threw for 248 yards and two TDs in Miami’s upset at Arizona.

“The Cardinals are a fool’s gold kind of team,” Kornegay said. “They beat up on bad teams like Dallas and the Jets. But whenever they play somebody good, it’s another story.”