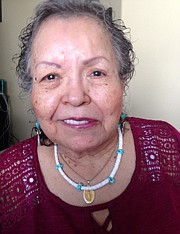 Germaine married Richard Wilson three months after she left the mission boarding school in Desmet, Idaho. They were married for 10 years and had five children: Vincent, Teresa, Clifford, Annette and Nancy. They then parted.

She worked and stayed with her family.

She worked as a CNA in Fairfield, Wash., for approximately 10 years. It was hard work but she enjoyed it. Germaine encouraged her children to get an education from an early age.

She married again to William “Tooks” Parr, with whom she remained until his death.