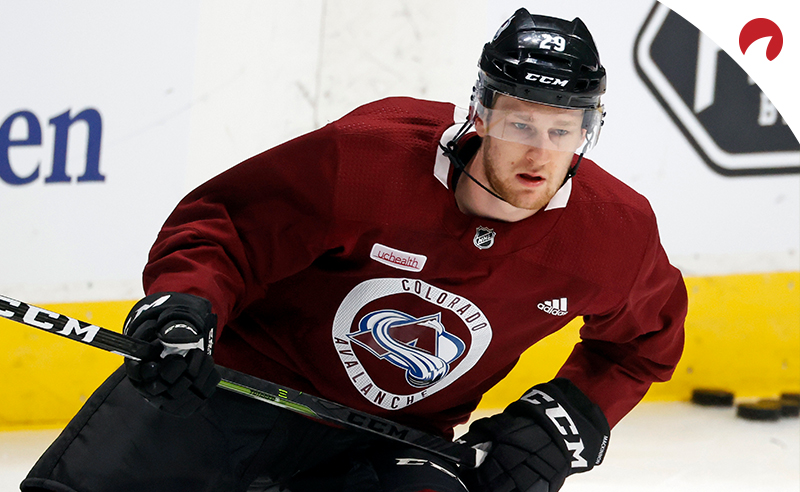 The race for the Hart Memorial Trophy, won last season by Leon Draisaitl of the Edmonton Oilers, is completely wide open in 2020-21 according to sportsbooks.

A bunch of big names sit atop the oddsboard, starting with Nathan MacKinnon of the Colorado Avalanche, who currently has the best odds to win the Hart Trophy as the NHL’s MVP.

Online sportsbook Bovada has released the Hart Memorial Trophy odds with MacKinnon grabbing the top spot at +550 odds, followed by Connor McDavid (+600), Artemi Panarin (+800), Nikita Kucherov (+1100) and Leon Draisaitl (+1200) to round out the top five choices on the oddsboard.

Odds as of December 4 at Bovada

Nathan MacKinnon finished as the runner-up in the 2020 Hart Trophy voting behind Draisaitl. MacKinnon, one of the great talents of the game with his dynamic speed and electric offensive play, is the preseason Hart Trophy betting favorite at +550.

Last year marked the third season in a row that he eclipsed 90 points. He finished with 35 goals and 58 assists as the leader of one of the best offensive teams in the league.

MacKinnon plays on arguably the best line in the NHL with Gabriel Landeskog and Mikko Rantanen. Toss in reigning Calder Trophy winner Cale Makar on the power play with MacKinnon and company and they become an unstoppable force.

MacKinnon got 48 first-place votes for the 2019-20 award and the motivation of losing out will surely add fuel to the fire this year. Combine that with the fact that he was super bummed for being knocked out of last year’s playoffs in the second round, and the stage is set for MacKinnon to have an extraordinary year.

Who Is Providing The Best Value?

There are a lot of great choices in the odds to win the Hart Trophy with these being the elite of elite hockey players. However, the player I think provides the best value to win the award is Buffalo Sabres captain Jack Eichel at +1500 odds.

Eichel, who netted a career-high 36 goals in 2019-20, is a gifted offensive player but has suffered in the past due to a shortage of talent around him. The Sabres brought in proven goal scorer Jeff Skinner a year ago, though he struggled in his first season in Buffalo, and recently added some more firepower by scooping up Taylor Hall on the free-agent market.

Hall gives Eichel the scoring winger he has desperately been seeking and his addition should boost Eichel’s offensive stats from last year’s 78 points.

The one thing that might work against Eichel is that he plays in a smaller market in Buffalo and does not get the national attention that he rightfully deserves. He finished eighth in the Hart Trophy voting last year and should improve on that this season.