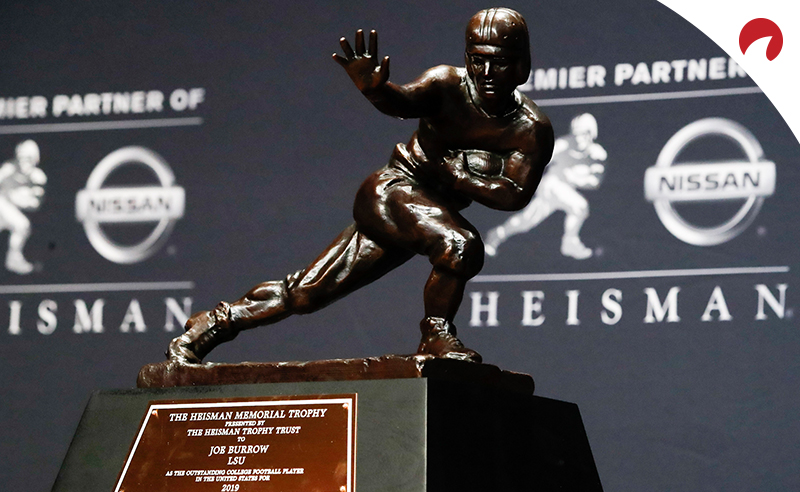 The favorite in the Heisman Trophy odds is Trevor Lawrence, as he has been for the majority of the season and into the preseason. However, the Big Ten and Mountain West are set to kick off this week and perhaps Lawrence’s path to the coveted trophy becomes a little more difficult.

Online sportsbook Bovada has listed Lawrence as the favorite at -155, followed by Mac Jones at +350, Justin Fields at +750, Jaylen Waddle at +900 and Kyle Trask at +1600 to round out the top five players on the oddsboard.

New to betting on college football? Be sure to take a look at our CFB betting guide to help you get in the action. Also, keep an eye on our college football odds page for the latest up-to-date betting lines.

Mac Jones Now No. 2 On Oddsboard

If you locked in a Mac Jones 2020 Heisman Trophy ticket at +2500, how much sweeter does that look three weeks later at +350. Of course, an Alabama QB is going to get some love for the Heisman Trophy odds because the team has a good chance to go undefeated year in and year out and more recently the Tide have shifted from being only a defensive powerhouse to racking up the points as well.

Jones is a real threat to Lawrence, who is coming off a terrific performance against Georgia Tech in Week 7, strictly due to strength of schedule since the Crimson Tide play in the much tougher SEC. The Alabama signal-caller also opened eyes last week with a 41-24 win over then-No. 3 Georgia and a defense considered one of the best in the nation. Jones completed 75 percent of his passes for 417 yards, four majors and an interception.

Moving forward, ’Bama doesn’t have a ranked opponent remaining on its schedule, while Clemson has a trip to South Bend to collide with No. 3 Notre Dame.

Can Lawrence Be Caught?

Clemson QB Trevor Lawrence has just one loss on his college record, leading the squad to a national championship in his true freshman season and falling in the national title game in 2020. Another year of growing mentally/physically and the sky is the limit in the 2020-21 season for Lawrence.

The only thing that holds him back from winning the coveted award is the conference in which he plays. The ACC isn’t exactly known as a world-beater in the college football sphere. So, outscoring your opponent by 25-plus points every weekend for a perfect regular season doesn’t seem to impress the voters as that’s what he has done twice already.

The junior quarterback is showing why he is the projected No. 1 pick in the 2021 NFL Draft, completing 73 percent of his 148 pass attempts with an average of 10.4 yards per completion and tossing 15 touchdown passes to just one interception in five decisive victories. Lawrence most recently sliced the Yellow Jackets defense for 404 yards with five touchdowns and one pick while playing only the first half and the opening drive of the second half.

All things considered, when you look at the body of work Lawrence has put together in his college career, it’ll be hard to take votes away from him come December.

There was perhaps nobody more excited to hear the Big Ten news than Ohio State signal-caller Justin Fields. The junior QB, who transferred from Georgia, had a strong 2019 campaign that saw him complete 67.2 percent of his 354 pass attempts with a remarkable 41:3 touchdown-to-interception ratio – two of those picks came in a narrow 29-23 loss to Clemson in the CFP semifinal.

In my opinion, the one thing that may hinder Fields’ chances of being named the Heisman Trophy winner is that he will only have eight games in which to state his case. However, he will have a couple of opportunities to show up on big stages: at Penn State in the second game and closing the season at home to Michigan.

Had Ohio State knocked off Clemson in last year’s CFP semifinal, it may have given Fields a slight edge over Lawrence. But with a reduced schedule and given the choice between the two at even odds, I’d take the Clemson QB.

By now, everyone is aware that LSU Tigers quarterback Joe Burrow won the Heisman Trophy in 2019 and was selected first overall by the Cincinnati Bengals in the NFL draft. But did you know his odds to win the award prior to the start of the season were +4000?

That’s the best part of betting on this prop. Players can be huge underdogs before the season starts and emerge from nowhere to take the spotlight. At some sportsbooks, Burrow wasn’t even listed as a Heisman candidate until after LSU’s second game.

Here at Odds Shark, we have compiled the opening and closing odds for every Heisman winner dating back to 2009, when Alabama’s Mark Ingram took home the hardware. These odds are courtesy of sportsoddshistory.com.

Here are the opening/closing betting odds along with the preseason favorite for the Heisman Trophy since 2009:

A futures bet is a wager made on events or milestones that will happen in time. The Heisman bet is a form of futures betting because you are making a pick based on an outcome determined at the end of NCAA football season. The trophy is given out in mid-December and if you want to get a bigger payout, it’s best to lock in your bets sooner rather than later so you can take advantage of better odds. The closer it gets to Heisman voting, the more the odds will change.

How to Read Heisman Trophy Odds

The above chart features the odds for each top player in college football. At your sportsbook of choice, the betting lines would look something like this:

This means that Lawrence is the favorite since he has the lowest odds and the highest chance of winning the prop, according to oddsmakers. If you were to bet $100 on Lawrence and he won, you would get a payout of $375 – your original $100 is returned along with your winnings of $275.

On the other hand, if you strongly believe that Bo Nix is going to outdo himself at Auburn and give the performance of a lifetime, a winning $100 bet on him would yield $2,700 – your $100 comes back along with your prize of $2,600.

We have the goods to ensure that you can make smart picks. Check out our college football pages to give you the edge over other bettors: