Playing poker is immense fun and for many, a way to make a profit or even fuel a career, too. When the most passionate players don’t want to play poker, but instead mix it up with another card game, what do they play? If that’s you and you’re not quite sure what to go for, why not look at our series of article about other games that can keep you sharp and improve your poker game without you even playing it? 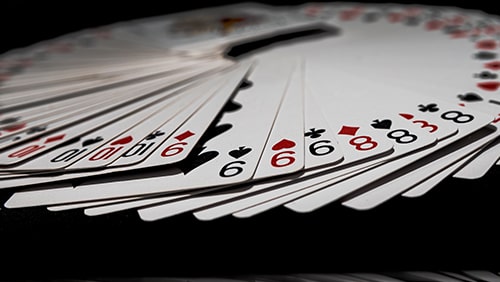 We start with the game of Rummy, a simple-to-play game that has many variations, such as Gin Rummy or Oklahoma Gin. Let’s take a look at the rules of the game in its easiest to play format.

Dealing a card at a time face down, each player gets seven cards, starting with the player on the left of the dealer. All the remaining cards are placed face down as the ‘stock’ pile, with one card upturned to become the first card on offer on the ‘discard’ pile to other players.

The Aim of the Game

Each player is looking to form a set of three or four cards, which is either three of the same card, (i.e. 5-5-5) or a run of three cards in the same order and the same suit (i.e. 4h-5h-6h). The player has to ‘declare’ this set once they have it, which leads to an interesting part of the game, being that any other player can add to their declaration. So, if you had the seven of hearts in your hand, you could to the run of 4h-5h-6h by slotting the seven on the end of that collection.

You can only add to a set on your turn, and whatever you declare, you must throw out, so the game moves at a good pace and you have to make hard choices about which card to keep. Having a good memory is vital, as if you can recall the cards that have been discarded, you know how long it might be before you see them again.

Once the entire stock-pile has been used, and presuming there is not winner, the discard pile is shuffled and turned upside-down (or not shuffled in some versions) to become the new ‘stock’ pile.

As the aim of the game is to get rid of all seven of your cards, you fairly obviously have to produce a set of three and a set of four to get out, either that or add to others piles in some way. In that sense, you don’t have to complete sets yourself, but you do benefit from having done so. Keeping ‘combos’ or combinations of hands, such as holding onto 8h-8s-7s in your hand, makes sense. With those three cards, you can complete a run with the nine or six of spades, but any eight makes a set of three eights, too, so you are drawing to four outs for two potential sets.

Once any player is out of cards, all the other players then have their cards counted for value and the scoring for this is simple. An ace is worth one point, a two is worth two, all the way up to nine counting for nine points. Any ten or picture card is worth ten points.

Play usually continues until a player reaches a certain number of points – try it with 101 points being the target for a first game – before everyone pays out or starts a new game if it isn’t for money.

Rummy refers to laying down all seven cards in an immediate declaration of winning the game. Some play without this rule, as it restricts other players adding to your pile and slows down the game. In the rules of Rummy, however, any player who does this gets double points from their opponents if they win (so, if their opponent was caught with 12 points in their hand, they’d get 24 points).

The risk of holding onto your cards like this is fairly obvious – if you don’t win, you get caught for the lot, and it can easily cost you plenty if you play this risky game.

What’s Your Edge as a Poker Player?

Rummy and Poker have a lot in common. A good memory, strong tactics and good awareness of the cards that players don’t want to play with (many ditch picture cards because of the danger of being caught with them) are all facets of poker that are represented in some way in Rummy.

Understanding where you are against the other players around the table – or living room, this is a highly social game – is vital.

Probability is important, memorizing what you need and what you believe others need, deduced by the cards thrown away by your opponents – is critical. You can also watch where players put cards in their hand. Sometimes, people order them from left to right in ascending numerical order.

There’s a lot of information on offer in the game of Rummy, and it’s really how you process it and make use of it that will define your success in the game.

Pick up Rummy this holiday season and enjoy it with friends or family while you’re not playing poker. The skills you pick up will benefit your poker game in the long run and mean you enjoy any hiatus from the game, enforced or otherwise.