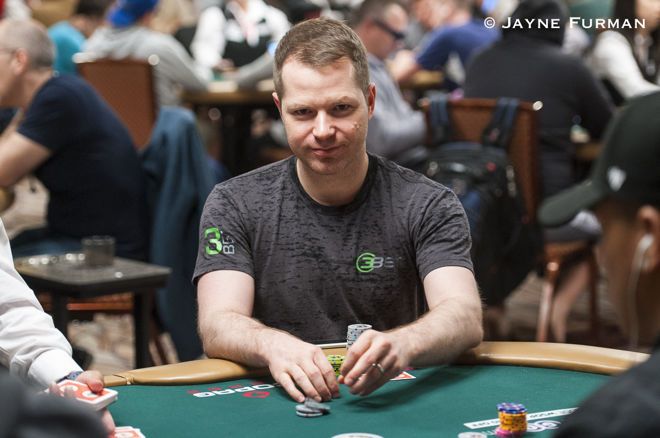 In this hand from the 2019 World Series of Poker Main Event, I face a donk lead on the flop and have a pretty strong draw. When facing donk leads, it’s important to range your opponent correctly and play accordingly.

When the flop fell

, the small blind led out for 7,000, and the player in the big folded. What do we do here? This player’s range should be comprised of either very good made hands that are susceptible to being outdrawn, pretty much nine-ten, some sort of draw, or a marginal hand like a pair of tens or nines, which would bet for both value and protection. Knowing that, should I raise?

I’m almost never raising here unless I have a flush, and even then, I might not raise a bad flush.

That’s hard to do against an unknown player, though in the Main Event I think it’s alright as most players aren’t ripping it in with a one-pair hand on the flop. However, in this instance, I opted to call and the

peeled off on the turn giving me the straight, but also putting out three clubs.

My opponent bet 18,000, about half pot. I almost always have the best hand here, the question is should I raise? I’m almost never raising here unless I have a flush, and even then, I might not raise a bad flush. Think about it, if my opponent is leading out on the flop with a draw, a flush draw is the most likely.

I just called and the

river put four clubs on board, thus improving me to a queen-high flush. My opponent checked and I needed to decide whether or not to bet. Going back to what I said before, if my opponent had a club draw, he could very well have either the

. If he did, he may check them given both the

would make a straight flush.

As such, I don’t think I need to bet the queen-high flush. What would I be trying to get called by? A flush is an answer, but the only flushes that I beat are the

or lower. He probably doesn’t have a lot of those, so then I’d be looking at either a straight, set or two pair, none of which are likely to call a bet.

I do check behind and my opponent showed the

for a flopped up-and-down straight draw. It was good to see he did lead the flop with a hand we thought would make logical sense – a junky draw. This ended up working pretty well for me, and I can confidently assume had I bet the river he would’ve just folded his two pair.

For a more thorough breakdown of this hand, check out my thoughts in the following video:

Jonathan Little is a professional poker player and author with over $7,000,000 in live tournament earnings. He writes a weekly educational blog and hosts a podcast at JonathanLittlePoker.com. Sign up to learn poker from Jonathan for free at PokerCoaching.com. You can follow him on Twitter @JonathanLittle.