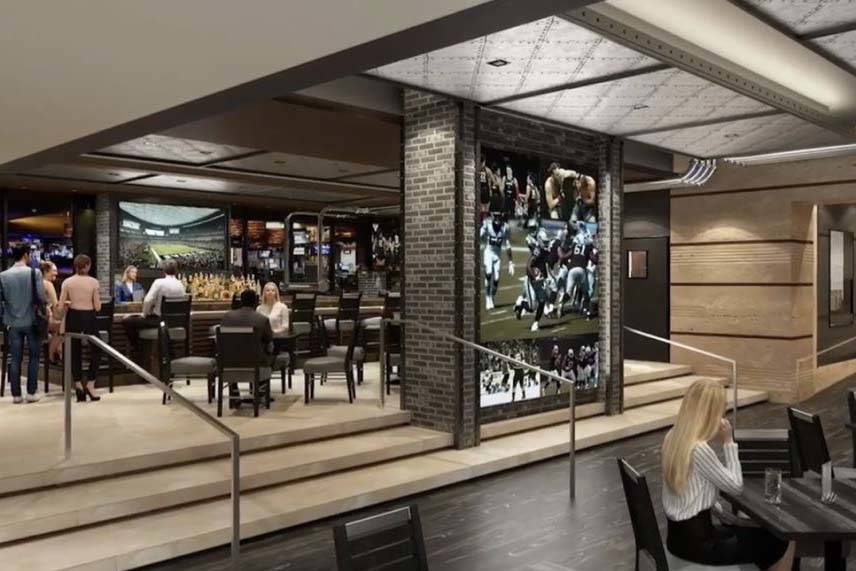 The first official Raiders-themed restaurant is set to open its doors early next year at the M Resort in Henderson.

The 8,000-square-foot Raiders Bar & Grill restaurant is under construction just off the casino floor and is expected to open in the first quarter of 2021. It will feature multiple bars, Raiders memorabilia, over 30 TVs, a large private dining room, outdoor dining and a gift shop featuring gear from the team, according to Patrick Durkin, vice president of marketing for M Resort.

“The game day viewing is going to be spectacular,” Durkin said in a video posted to the M Resort’s Instagram account. “Lots of energy.”

The menu has not been released, but M Resort general manager Hussain Mahrous told the Review-Journal last year that plans call the resort’s culinary team to staff the 24/7 restaurant.

Renderings released by the M Resort show an open floor plan, with Raiders emblems marking the space and the team’s helmets and footballs lining both walls in the main entrance from the casino.

The new restaurant is being constructed in the space that Jayde Fusion formerly held at the casino, according to Durkin.

The restaurant is part of M Resort and the Raiders 10-year founding partnership deal that deems the resort the official hotel of the team’s headquarters.

Raiders President Marc Badain said members of the team are likely to frequent the restaurant, as the Raiders headquarters is just a few miles away and players and staff live in the area.

“The M hotel has been our home away from home,” Badain said in a marketing video. “Our players will have a chance to come here. … A good chunk of our organizations live within four or five miles of this location.”