Barring any major explosion of new COVID-19 cases, Macau could soon begin to welcome more foreigners. Ongoing travel restrictions have made it difficult for the city’s casinos to recover from the lockdown caused by the coronavirus pandemic, and they have only been able to try to tread water for the past couple of months. However, new guidance is being prepared by the city’s governments that could see some changes as soon as the beginning of next month. 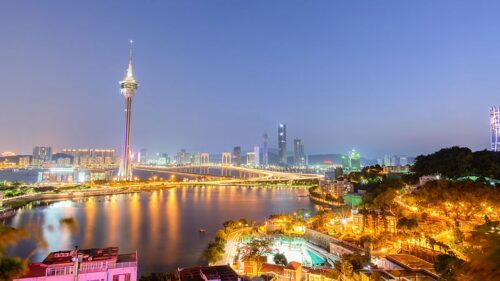 According to Macau’s Government Information Bureau, the city is ready to begin accepting applications from “eligible foreigners” who wish to visit the city starting December 1. While the initial phases of the expanded visitation capabilities in the city won’t include major tourism segments, the news is still a step in the right direction toward the ultimate full recovery everyone wants to see happen sooner rather than later.

Initially, only those foreigners “for matters serving [Macau’s] public interest” will be eligible to apply for entry. These include individuals working in disease prevention and control, emergency rescue, public services and others involved in activity that can help the city ensure the smooth operation of day-to-day activities. Following this group, the second round will include those coming from mainland China who have been on the mainland for at least two weeks before heading to Macau. However, those applying as part of this group will initially have to be family of a Macau resident, students at higher-education institutions or a registered non-resident employee or a member of that employee’s family. Additionally, those planning a trip for a business or academic event can apply.

While those groups most likely won’t include a lot of gamblers, another change approved by Macau’s government could facilitate casino traffic. Previously, anyone from Hong Kong, Taiwan or mainland China who had visited a foreign country within two weeks of a visit to Macau would be denied entry. However, that policy is now going to be relaxed, and residents from those areas can now apply to enter Macau, even if they visited a foreign country ahead of that trip.

As always, the government has the final say on whether an application is approved, so travelers need to be prepared to keep an open mind. Responses to visitation requests will be provided within 15 days of the application’s receipt.

It seems like Macau is already starting to see some improvement in its casino action. The annual Golden Week at the beginning of October wasn’t as good as most had hoped, but things are reportedly getting better. According to Bernstein Research, which just took a look at initial figures coming out of the city’s casinos, gross gaming revenue (GGR) is up from what it was during Golden Week, which typically gives casinos a nice autumn boost. For the first week of November, the firm indicates that GGR was about $250 million and, while this is still off by 67% compared to the same period last year, it is 13% higher than what was reported during the annual Chinese holiday.