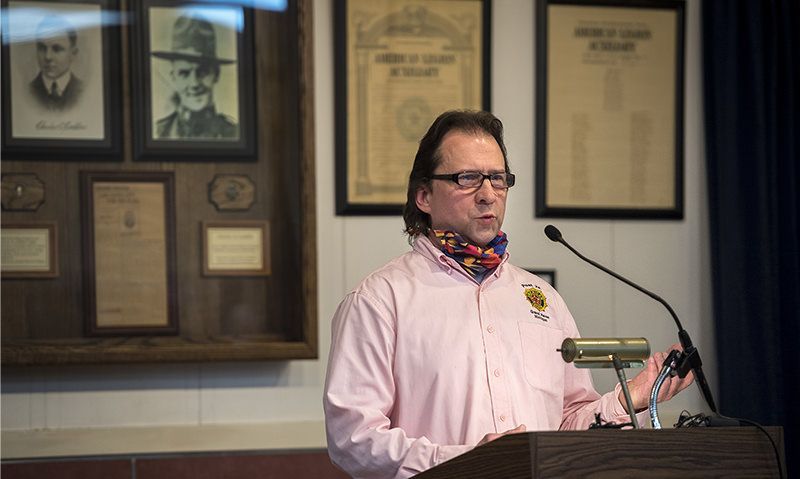 On May 4, 1918, Conklin and his men pushed to the German frontline for an assault when he was hit and wounded by shrapnel. He was taken to an American hospital in Baccarat, France, where he succumbed to his wounds on May 7. He was the first Grand Haven resident to make the ultimate sacrifice on the battlefield during World War I.

Conklin was buried at an American plot in Baccarat until he was disinterred on Feb. 9, 1921, at the request of his parents. He arrived home to Grand Haven for reburial on June 3, 1921.

Petras knew Conklin was eligible for the Purple Heart, so he contacted Michigan U.S. Rep. Bill Huizenga’s office to make inquiries to the U.S. Army about the medal. However, the initial inquiry resulted in unfortunate news. Conklin’s military records were among those destroyed in the Military Personnel Records Center fire of 1973 in St. Louis. The loss of Conklin’s military documents from the fire resulted in the U.S. Army returning word that they could not determine his eligibility for the Purple Heart. But during his research online, Petras had uncovered a key document – a letter from the U.S. detailing the disinterment of Conklin. On the document it stated cause of death: DWRIA (died of wounds received in action).

Petras provided this evidence as proof. “And that was the document that led to the reconsideration of the U.S. Army saying Pvt. Charles A. Conklin is eligible for the Purple Heart,” he said. “It is just an amazing blessing to have, after a 101 years, a part in acknowledging the namesake of Post 28 for his honorable service and the ultimate sacrifice he made for our country.”

Huizenga presented the Purple Heart to the Charles A. Conklin American Legion Post 28 on March 26, during a ceremony at the post.

Read more about Conklin and the story behind Petras uncovering the 101-year-old document here.