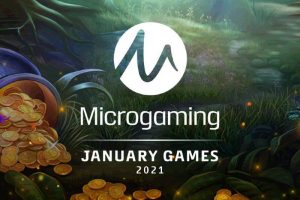 Microgaming kicks off the new year with even more exciting news for its clients. The new stunning content provided by the company will be launched at the beginning of the new year and will continue to the last days of January.

The first new release was Shamrock Holmes Megaways™ (All41 Studios). The game went live on January 5 and features the world’s most famous leprechaun detective.

Shamrock Holmes Megaways™ is the first of total of two new games from the brand ALL41 Studios that will be released this month.

The second Megaways™ game will be released later this month on January 26. Forgotten Island Megaways™ (All41 Studios), represents a new take on the legendary figure of the king of the apes. The game is also packed with a lot of exciting features.

Microgaming released the second game of the year on January 7th. The Bounty (Snowborn games) is a Spaghetti Western Adventure. The player represents a bounty hunter on the search for the bad guys. They need to track them down in order to get six matching posters to win the jackpot.

The game represents an interesting twist to the traditional slot format, and includes a fantastic soundtrack for those who does not like to play in silence.

Foxpot (Foxium) goes live on January 12 and even though the game consists of just three reels and only one active line, it is definitely not one dimentional. There is an extra nudge feature for the fans of the humble pub fruit machine.

Foxpot is then followed by Golden Stallion™ Ultraways™, which launches on January 14, Hyper Strike™ (Gameburger Studios), on January 19, and the video bingo game Pachinko (Neko Games), on January 20.

Golden Stallion™ Ultraways™ is the first Microgaming release from Northern Lights Gaming and it takes the players through the exciting canyon in the Old West.

Some of the partner content that will take part of the Microgaming games platform this month is Whisker Jones (1X2gaming) that went live on January 6, Bondi Break (Lightning Box Games) on January 18 and the modern version of the classic fruit machine 777 Mega Deluxe (Crazy Tooth Studio) on January 21.The January releases end with Animals of Africa (Gold Coin Studios) and Roulette x5 (Golden Rock Studios), both going live on January 28.

Microgaming said goodbye to 2020 with some exciting new titles, such as Alchemy Fortunes, Hyperclusters and others