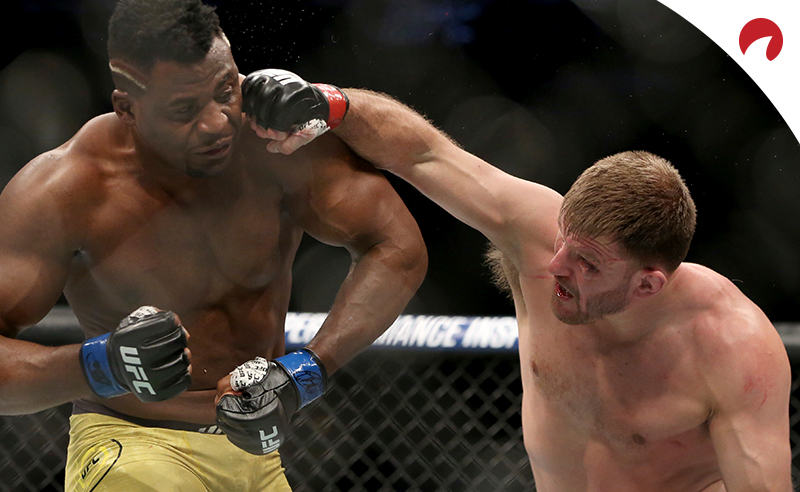 For the first time since November 2018, there will be a new challenger for the heavyweight championship as Stipe Miocic vs Francis Ngannou headlines UFC 260 on March 27.

For more than two years, the heavyweight belt has been contested between Miocic and Daniel Cormier but following the conclusion of their trilogy, Ngannou is getting another title shot after losing to Miocic in January 2018.

Online sportsbook Bovada has released Miocic vs Ngannou odds for their rematch and although Stipe won the first meeting, he is a +150 underdog in the second fight with Francis listed as the -175 favorite. This means you would have to wager $175 on Ngannou to win to profit $100, while a $100 bet on a Miocic win would profit you $150.

Odds as of January 20 at Bovada

New to betting on the fights and interested in the Miocic vs Ngannou odds? Check out our UFC betting guide to help you get in the action. Also, keep an eye on our UFC odds page for the latest up-to-date Stipe Miocic vs Francis Ngannou odds.

With the man who lost the first fight being favored in the second in Miocic vs Ngannou odds, it creates a very interesting betting market. On one hand, if Miocic did it once, surely he can do it again and is a live dog at +150. Conversely, Ngannou only needs to land one big punch to cash at -175. These odds are exactly the same as those for their first meeting.

“The Predator” lost that fight to Miocic at UFC 220 in January 2018, marking his first defeat in the UFC, and he followed that up with a lackluster snoozer and another loss against Derrick Lewis. Since then, Ngannou has won four in a row, all by knockout with the longest bout lasting 71 seconds.

He was frustrated being left on the sideline as Miocic and Cormier settled their trilogy and at UFC 260 he gets a shot at redemption. At -175, he’s offering good value.

Being an Underdog Is Nothing New for Miocic

The first time that Miocic fought Ngannou, he cashed as a +150 underdog. In his last two fights vs Daniel Cormier, he was a +120 underdog (fourth-round knockout win) and a -110 pick‘em (win – unanimous decision). He set the record for most heavyweight title defenses and has won eight of his last nine fights – the disrespect at putting the champ as an underdog.

Miocic has a great ability to survive and make a fight sloppy and tiring, which was his approach in his first encounter with the Predator. Can he hit as an underdog again?

An interesting point heading into this fight will be Ngannou’s mental game. I mentioned above that he had a snoozer of a fight against Derrick Lewis following his loss to Miocic. He remarked at the time that he was a little gun-shy after being taken down repeatedly and losing a decision.

Ngannou hardly threw any strikes in the Lewis “fight” but has looked remarkable since then. Could the nightmare of being exhausted by Miocic rear its ugly head when he’s locked in the cage for a rematch?

Can Ngannou Put The Past Behind Him?

If the Ngannou of the last four fights shows up on March 27, then there’s a very high probability that he walks away with the belt. His boxing isn’t exactly sexy but it doesn’t need to be. His ferocious forward pressure and incredible punching power is a combination that typically leaves his opponents looking up at the lights after eating one of his punches.

At times when the Predator throws, he leaves big openings to be countered and hit hard, but that means you have to stand in the pocket, which is a dangerous game. The main reason he lost the first fight to Miocic is that he was outwrestled and gassed out completely. We’ve not seen him grapple since so we’re not sure whether he’s fixed that part of his game.

In the first meeting between these warriors, as soon as Ngannou would open up to throw, Miocic would level change and take him down at will. With Francis’ strikes typically being huge swing-from-the-hip hooks or uppercuts, Stipe was able to slip punches and avoid much damage. That said, he did absorb some punches in the first couple of minutes but was able to avoid the kill shot Ngannou is known for.

The biggest difference for me when watching that fight was that Ngannou was head-hunting and believing solely in the knockout punch. Miocic was the better boxer, throwing straight, faster punches, and could slip those slow yet powerful haymakers coming his way. After about three minutes of the first round, Ngannou was exhausted and Miocic dominated the rest of the fight with his wrestling.

Although the challenger is on a complete high recently with four straight knockouts in less than a minute and a half, his conditioning hasn’t been tested while the champ’s has. Miocic most recently went five hard rounds with Daniel Cormier, earning the decision win.

There’s no doubt that Miocic has more tools in his bag to win this fight than Ngannou. Can Francis land that one clean shot and knock out Stipe? Absolutely. Should he be the favorite to do so? I don’t think so. Miocic is just the better, smarter fighter and I think he retains his title.