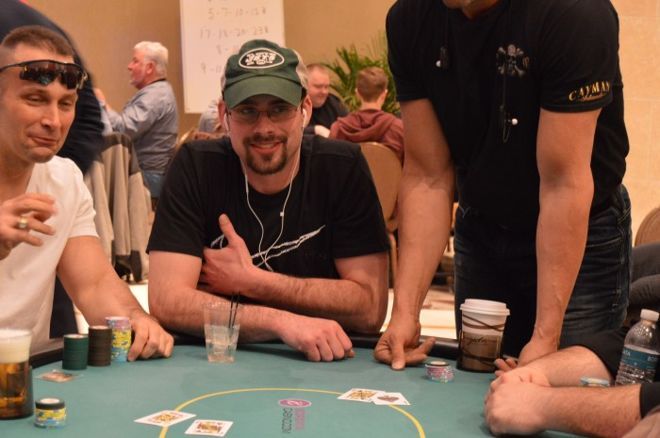 The latest partypoker US Network Online Series wrapped up over the weekend. The 11-event New Jersey series catered to 1,534 entries and awarded $304,992 in prize money. On Sunday, it took just over nine hours for Matthew “gailums” Gailums to convert his $215 buy-in into more than $13K in the $215 Main Event NLH $75K GTD. He made his way through a field of 357 entries to take down the top prize.

The $13,515 first-place prize nearly doubles his previous best online score of $7,528 in a WSOP event earlier this year and is just shy of his best live score, $16,271 for third in a $300 event at World Poker Tour – WPT Borgata Open, Atlantic City.

Action of the Day

Action got underway at 5 p.m. ET on Sunday, and the field grew steadily through the 15 levels of registration. When it was all said and done, 357 entries were on the board, just a hair shy of the required number to hit the guarantee of $75,000. That meant 54 players would share in the prizes, with $13,515 up top for the win.

Ted “roystalin” Ely did a little better, making it to 35th place, while Jaime “mooseman1710” Reyes took 21st place. WSOP bracelet winner and Borgata Pro Michael “Gags30” Gagliano made a valiant run through the field but ended up bubbling the final table in 10th place for $1,282 after getting it in with the best, but falling to the eventual winner.

Action went quickly to start the final table with “nautic” falling almost immediately. “TheLuckBox“, Alex “JinYang” Butcher, and “Marley0408” were eliminated in the next 20 minutes. They played five handed for a bit before “FRIELnGood” lost a race with eights against the big slick of Michael “llllllllllll” Haberman. “jerseyman99” and “Monkee” fell a few minutes later to set up a heads-up match that went on for 30 minutes.

Haberman was in his second heads-up of the day after taking second in the NJCOOP Event #27: $300 NLHE [Sunday Special SE] earlier in the evening, but he came into the final phase with the chip disadvantage. Gailums played effective small ball, never giving up his lead before finally taking it down in a hand where Haberman flopped best, but Gailums went runner-runner boat for the win.