Since Week 2 of the NFL season, Russell Wilson had been entrenched as the favorite to win the 2020 NFL MVP.

But ahead of Week 12, Patrick Mahomes leapfrogged him to become the slight odds-on favorite. One week later, it looks like a foregone conclusion that the Kansas City Chiefs superstar will win the hardware.

Wilson’s fall from grace has been something to behold considering he was the odds-on -190 fave last month.

Mahomes and the defending champion Chiefs occupy the top spot on the Super Bowl oddsboard with a price of +250, while Wilson’s Seahawks come in at No. 4 at +800.

Here’s a look at the players with the best odds to win the 2020 NFL MVP Award at Bovada. For a full list of the top places to bet on football, head over to our Best NFL Sites page.

Who Is Favored to Win the NFL MVP Award?

Odds as of December 5 at Bovada 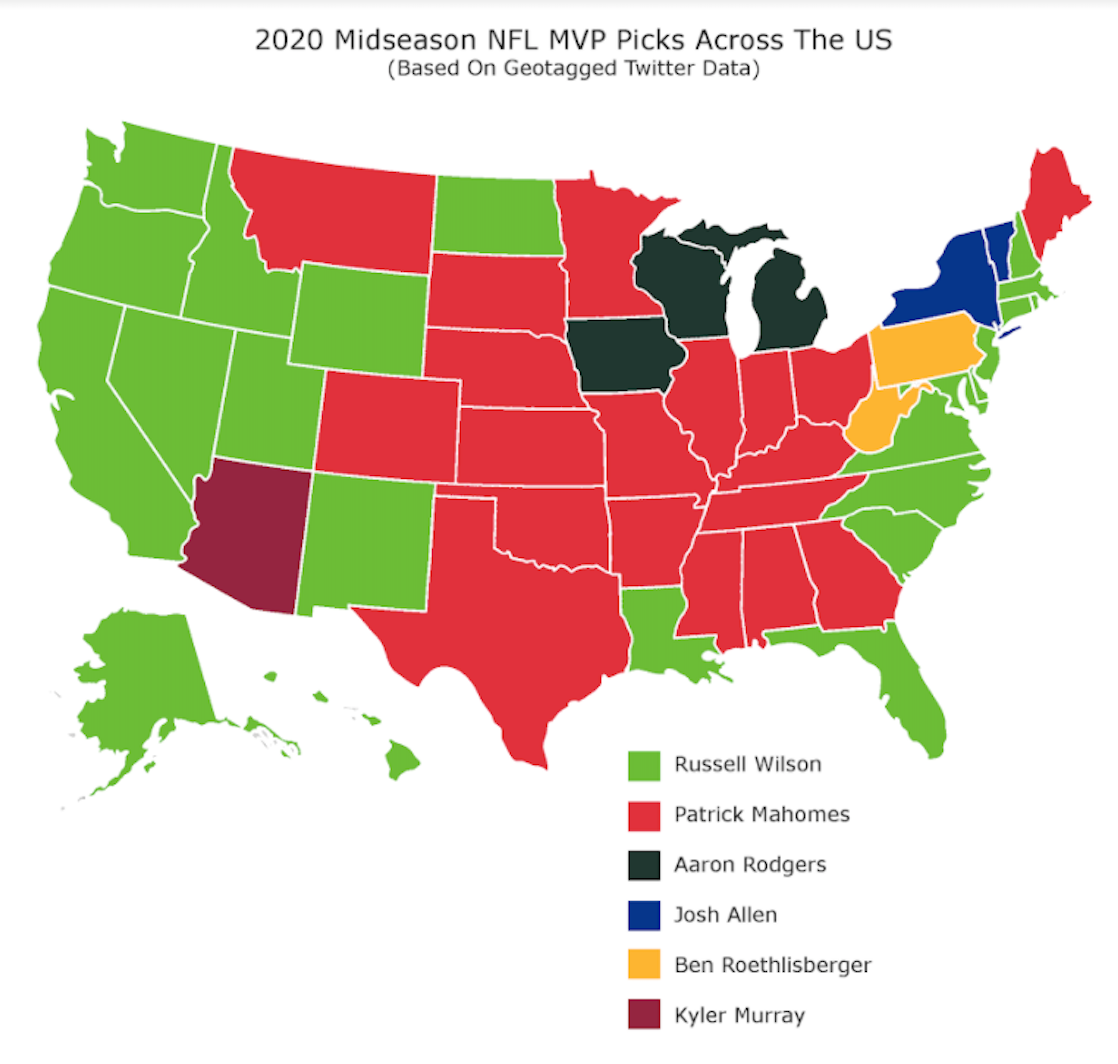 Wilson is Losing Ground to Mahomes

Thanks to a 6-1 start, the Seahawks were on cruise control to start the season. Seattle has come back down to earth over the past month, however, and Wilson has cooled off in a big way in the process.

Seattle dropped two in a row to the Buffalo Bills and Los Angeles Rams but got back on track in recent weeks, beating the Arizona Cardinals and Philadelphia Eagles.

Regardless, Wilson’s MVP pace has clearly stalled. The Wisconsin product ranks second in touchdown passes (31) but he’s thrown 10 interceptions, just one pick away from matching his career high. Earlier in the year, it looked like Wilson was on the inside track to breaking Peyton Manning’s single-season touchdown record, but he has thrown just nine TDs in his last five contests.

For the first time since Week 2, Wilson is not in the top two on the oddsboard after getting surpassed by Aaron Rodgers. His mediocre numbers against the Eagles on Monday Night Football (22-for-31, 230 yards, one touchdown) won’t help.

Odds Shark is hosting a new invite-only picks contest, the Capper Cup, that you can follow for FREE expert picks during the 2020 NFL regular season. The contest includes some of the best handicappers from the sports betting industry competing for a grand prize. Follow the action now!

In this column three weeks ago, I advised jumping on Mahomes to become MVP given the +220 value on him. Last week, his odds drifted into minus money (-125), and now they’re almost unbettable at -400.

Mahomes has continued his superstardom in 2020, becoming the fastest quarterback in NFL history to reach 100 career passing touchdowns.

Mahomes threw for a season-high 462 yards and three scores against the Buccaneers in the Chiefs’ 27-24 Week 12 victory. He leads the NFL in passing yards (3,497) and ranks third in passing touchdowns (30). It’s worth noting he’s thrown only two interceptions – a big reason why the Chiefs are 10-1. Simply put, the MVP award is his to lose right now.

Jackson is Well Out of the Running

There were plenty of questions surrounding Jackson when he entered the 2018 NFL Draft, but the former Heisman Trophy winner answered all of those last year to become the 17th signal-caller since 2000 to become MVP. Marshall Faulk (2000, 2001), Shaun Alexander (2005), LaDainian Tomlinson (2006) and Adrian Peterson (2012) are the non-quarterbacks to win the award in that span.

Just how much of a surprise was Jackson’s triumphant 2019 campaign? The Louisville product opened the year as a +4100 long shot to garner the bragging rights as the best player in the NFL. He ended the season with 36 touchdowns and 3,127 passing yards while throwing only six interceptions.

More impressively, Jackson broke Michael Vick’s record for most rushing yards in a single season by a quarterback, finishing with 1,206 yards on the ground and seven scores.

Jackson hasn’t been nearly as dominant in the 2020 campaign, as he’s slipped to last on the oddsboard. His numbers aren’t up to MVP standards right now and he’s well out of the race at +15000.

For more football betting information, check out our NFL page.

How to Bet on NFL MVP Odds

Popular NFL bets include point spreads and totals (OVER/UNDER). For those looking for something different, you can wager on which player will be named MVP. As football season progresses, you’ll see the MVP action changing. To get in on the action, you can make a futures bet.

What is a Futures Bet?

A futures wager is a bet on events that will take place in time, like the Most Valuable Player award in the NFL. At your betting site of choice, you’ll see NFL MVP odds listed like so:

Unlike a moneyline bet where favorites would be marked with the minus sign (-) and underdogs with the plus sign (+), the fave here would be the player with the lowest odds. In this case it’s Dak Prescott.

Let’s say you have $55 to spend and you decide that you like Mahomes for MVP. A winning bet would give you a payout of $275 – your original $55 is returned along with your loot of $220. The higher the odds, the more money you’ll see. But, don’t bet on a +5000 MVP candidate in September in the hopes that you’ll make bank at the end of the regular season. Oddsmakers don’t only look at current performance when setting the odds. They also look at past performance, off-season activities and training camp.

Our Odds Calculator can show you how much you’d win based on the odds and amount wagered.

With futures bets, it’s important to snag odds early. As we get closer to the Super Bowl, the lines will move. Oddsmakers update the odds as players up their production or are plagued by injuries. Keep in mind that if you were to back a player in the MVP race and he suffers a season-ending injury, most sportsbooks will give you your money back since you technically didn’t lose the bet and have no way of winning it.

As soon as the Most Valuable Player trophy is awarded to the winner, sportsbooks will update the betting results and you can cash out your bet.