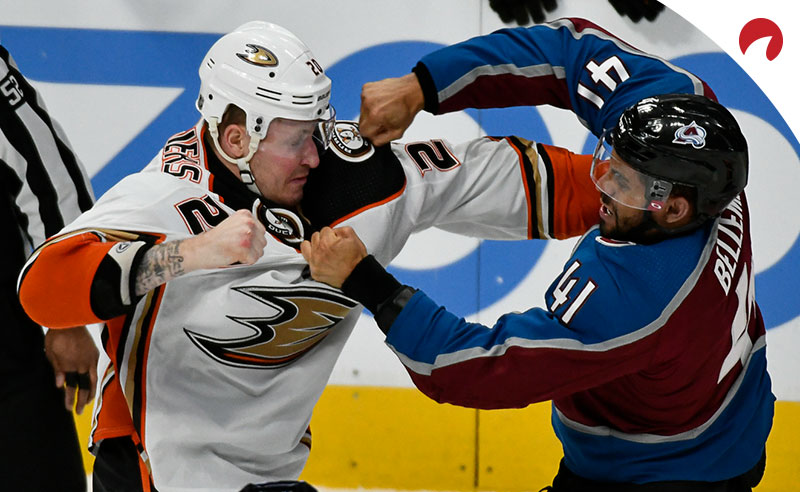 The 2021 NHL season is shaping up to be unlike any other for a variety of reasons.

Due to the COVID-19 pandemic, a one-off division realignment will take place this year, as the North, Central, East and West divisions are set to sort out which teams will earn the right to participate in the playoffs. The North Division pits solely the seven Canadian teams against each other for the first time in NHL history.

With the league taking on such a different look, oddsmakers have been busy providing hockey bettors with ample opportunities to wager on some alternative props. Online sportsbook Bovada has released odds on which players will lead their respective divisions in fights, with plenty of value on the board.

Here’s a breakdown of the odds for all four divisions and the likeliest candidates to cash futures tickets on odds to lead NHL divisions in fights.

For more betting content on the ice, head over to our NHL hub. To find the sportsbook that’s right for you to get some money down on the NHL, make sure to check out our Sportsbook Review page.

A pair of Ottawa Senators top the board in the North Division, as Brady Tkachuk and Austin Watson are tied as the +150 co-favorites to spend the most time in the penalty box for their work as pugilists.

Tkachuk has already participated in seven fights in his two years with the Sens, while Watson, who came to the team as a free agent in the offseason, has 33 pro fights under his belt – all with his former team, the Nashville Predators.

Tkachuk and Watson will get in no shortage of scraps up north this season, but my best bet for this prop is Edmonton’s Zack Kassian. Kassian has 22 fights in his Oilers career and is on pace to add to that total in 2021.

The “Battle of Alberta” between the Oilers and Calgary Flames kicked into a whole new gear last season, and I’m expecting Kassian to fight regularly in the shortened season.

Tampa Bay’s Barclay Goodrow is the odds-on favorite in this prop, so you won’t find much value in backing him to lead the Central in fights. Instead, take a look at Patrick Maroon.

Maroon, the back-to-back Stanley Cup champion with the St. Louis Blues and Tampa Bay Lightning, isn’t shying away from fisticuffs in the latter stage of his career. The 32-year-old had five regular-season fights and one preseason scrap in his first campaign with the Bolts. Don’t be surprised if he surpasses that number and paces the Central Division in the category of most fights.

Can Anyone Catch Deslauriers in West Division Fight Odds?

There’s no question who’s the true heavyweight of the West Division. Nicolas Deslauriers exploded onto the scene a year ago by posting a career-high 14 fights for the Anaheim Ducks. Prior to the 2019-20 campaign, the Canadian’s career high in fights was seven in 2014-15.

It’s tough to bet against the favored Deslauriers here. Ryan Reaves has patroled the ice as one of the NHL’s top fighters for years, but he’s only gotten into six scraps in the past two years. Los Angeles’s Kurtis MacDermid is not a bad value play at +500, but I’m taking Deslauriers all day to cash this prop.

Wilson, Johnston Out in Front in East Division Fight Odds

The East is easily the division with the most uncertainty on the board this season. It’s anyone’s guess which man will spend the most time in the sin bin for fighting, and oddsmakers are giving both Tom Wilson and Ross Johnston a +200 shot to collect the most fighting majors in the East.

Wilson has been one of the toughest players in the NHL for the past decade, but I’m choosing Johnston this time around. He had two preseason and six regular-season fights in 2019-20 and is primed to keep the momentum rolling this year.

The 26-year-old is younger than Wilson and is the unquestioned tough guy on Long Island. Don’t be surprised if he’s out in front of odds to lead NHL divisions in fights when all is said and done.