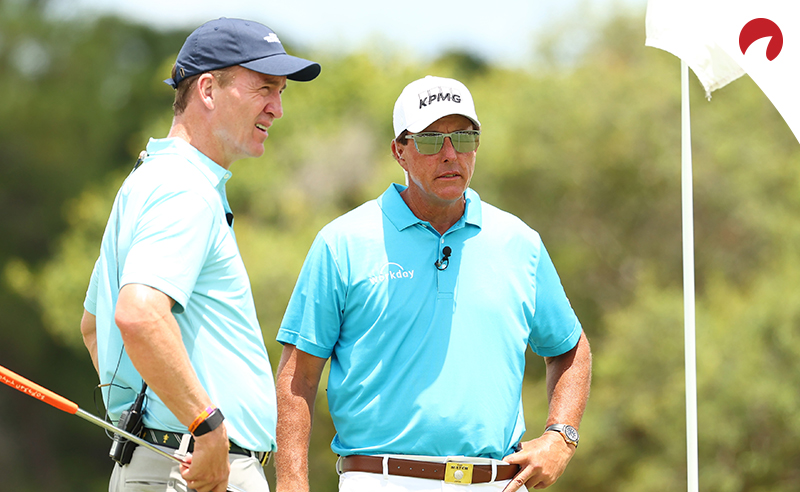 The third iteration of “The Match: Champions for Change” has been scheduled for November 27th, and for the first time, it will not consist of Tiger Woods. Phil Mickelson returns as the only pro golfer in the field, won the first match against Tiger straight up, before losing the match earlier this year with partner Tom Brady, to Woods and Peyton Manning.

For this version of The Match, Mickelson will be partnered with NBA Legend Charles Barkley, who was a guest analyst for each of the two previous iterations. They will face off against returning champion Peyton Manning, and two-time NBA MVP, and scratch golfer Stephen Curry.

When it comes to odds to win the Match 3, sportsbooks are giving Mickelson and Barkley the slight edge as -105 favorites. While Bodog has Curry and Manning not far behind as -135 underdogs.

Odds To Win The Match 3

The third edition of the Match is officially set for the day after American Thanksgiving. The live charity event is set for Friday, November 27th, at Stone Canyon Golf Club in Oro Valley, Arizona.

The competition format will be modified alternate-shot match play

The event will be contributing and highlighting diversity, equality, and inclusion through donations to Historically Black Colleges and Universities while raising awareness and spotlighting opportunities for diversity and equality in sports. It is a cause that all four athletes have supported throughout their careers, which ultimately led to the foursome teaming up for the event.

Mickelson and Barkley are the Favorites

Mickelson has been playing some of his best golf to date. A big reason why the Match 3 odds favor him and Barkley, is because he just won for the second time in as many starts on the PGA Tour Champions. His partner Charles Barkley is known for one of the wackiest golf swings, but Mickelson is excited to team up with the NBA on TNT analyst.

“While we may need a handicap for Chuck, I’m looking forward to playing with Peyton and Stephen and to help raise money for another important cause,” said Mickelson.

As the only pro golfer at the event, and it being a course that he owns, it is completely fair for him and Barkley to hold a slight edge over Manning and Curry. At -105 they own the best odds to win The Match 3. However, Curry who is known most notably to hit long-range three pointers in the NBA, is actually a scratch golfer. Which is a big reason that Curry and Manning come in as slight underdogs at -135.

Barkley has not played in a competitive golf tournament since earlier this July at the American Century Championship, where he was only able to make three pars, and finished second to last. The Match 3 prediction is for Mickelson to do most of the heavy lifting, with Barkley hopefully able to make a few decent shots to keep things interesting.

Unlike Barkley, Curry has a history of playing on the tour at the American Century Championship and at two events on the Korn Ferry Tour. The Korn Ferry Tour is the minors of the PGA, just one step down from the Tour. Although Curry has yet to make the cut at the Korn Ferry, he still fares pretty well for someone who does not play golf as his primary sport.

Manning managed to play decent back during the Match event in July, making a few pars and hitting some really good drives off the tee. According to the USGA’s Handicap Information Network, the quarterback-turned-golfer has a 6.4 handicap. The Match 3 betting odds have Curry and Manning as the underdogs, but in this alternate shot format, the two should be able to compete till the very end.

The Match 2 Bode Well For Charity and Sports

The Match 2 took place on May 24, and it was one of the most-watched events during the pandemic. It raised $20 million for Covid-19 relief efforts, with all four players showcasing their athletic and comedic prowess. It featured Manning with Woods and Tom Brady with Mickelson.

The duo of Woods and Manning won three of the first six holes to take an early lead, but Mickelson and Brady made it interesting on the back nine, picking up wins on Hole 11 and Hole 14 to make it a one-hole game down the stretch. The highlight of the match came when Brady dropped an eagle in on a par-5 from the fairway, after Barkley who was an analyst for the match was taking shots at his golf game.

In the end, Manning and Woods -185 would end up narrowly edging out Brady and Mickelson +150.

Back in 2018, Mickelson and Woods came together for a $10 million dollars winner-take-all televised tournament. Woods was the favorite at -190, with Mickelson coming as the +165 underdog.

While it didn’t garner the same kind of attention as the most recent version of the Match, the two golfers were playing highly competitive golf that resulted in a tie after the 18th hole. Following the 18th hole, the golfers continued to play until a winner was declared, it turned out that lefty Mickelson was able to pull away on the 22nd hole and win the big purse.

When you check out the best golf betting sites and see odds for “The Match” featuring partners of Tiger Woods and Peyton Manning vs Phil Mickelson and Tom Brady, the betting odds should look something like this:

To bet on these odds, you would be making a moneyline bet. If you think the favorites Mickelson/Barkley will win “The Match 3” and you bet $100 on the duo, you’d get a payout of -135. You’d get your $100 back along with your winnings of $74.

However, if you think Curry and Manning will emerge victorious as the underdogs and you bet that same $100, you’d win $260. This is your $100 back along with $95 in profit.