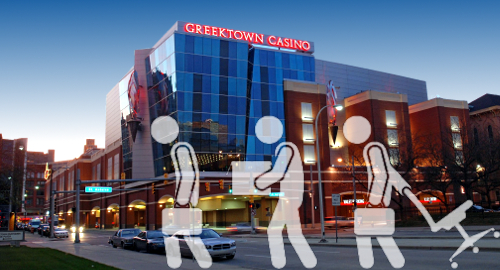 Regional casino operator Penn National Gaming (PNG) says it has reopened over 70% of its casinos following their COVID-19 shutdown, but thousands of staff may not be around long enough to celebrate.

On Friday, PNG announced that 30 of its 41 gaming and racing venues have resumed operations after being ordered to close in March to minimize COVID-19 transmission.

The total was boosted Friday by four PNG properties in Ohio and the Hollywood Casino at Penn National Race Course in Pennsylvania. PNG is now welcoming guests to casinos in 13 of the 19 states in which it operates.

PNG CEO Jay Snowden called the news “an important milestone” in the company’s rebound and he thanked state regulators for including gaming in their economic revival plans.

Investors largely shrugged at PNG’s victory lap, as the stock is currently up only around 1% from Thursday’s close. Then again, the stock has risen over 700% from its March 18 low of just $4.52, so perhaps there’s only so much slack left in that chain.

As the pandemic unfolded, PNG furloughed around 26k staff, many of whom are now happily returning to work. But with gaming regulators imposing strict caps on the number of gaming positions and limits on other aspects of casino operations, around 10% of PNG’s furloughs could become permanent layoffs starting in August/September.

Among the affected staff are 621 employees of the Greektown Casino-Hotel in Detroit who are facing the axe as of September 15. Detroit’s three commercial casinos have yet to reopen — and will face strict limits on gaming positions once they do — despite some of the state’s tribal casinos restarting their operations.

In letters to officials in states where staff could receive layoff notices, PNG chief human resources officer Gene Clark said the cuts were due to “circumstances that were sudden, dramatic and beyond our control.” Clark said the full impact of the lengthy halt to its operations “was not reasonably foreseeable until now.”

In May, Snowden told analysts that PNG would be “really thoughtful around how we ramp back up what our operating model looks like” in terms of labor expenditure and that businesses could likely “operate more efficiently than they did” in a pre-pandemic environment.

This week, Bank of America analysts suggested that PNG and rival Boyd Gaming would benefit the most from a “substantial rebound” in demand across many states. With air travel still viewed with trepidation by many consumers, the prevailing theory is that regional casino operators will enjoy greater returns in the short-term than casinos in ‘destination’ hubs like Las Vegas.

That theory was supported by recent SEC filings from Caesars Entertainment, which said its reopened Nevada properties had seen revenue fall 56-58% from the same period last year, while regional properties were flat or up 2% year-on-year.

However, while the regional outlook may presently be bullish, a growing number of analysts believe the US economy is in for a major downturn in another couple months as federal programs aimed at supporting businesses screech to a halt. The resulting layoffs could sandbag any economic revival before it truly got started, leaving many former casino customers desperately trying to remember what ‘discretionary income’ was.