Phil Galfond claimed his third challenge match victory over the weekend after Chance Kornuth threw in the towel. 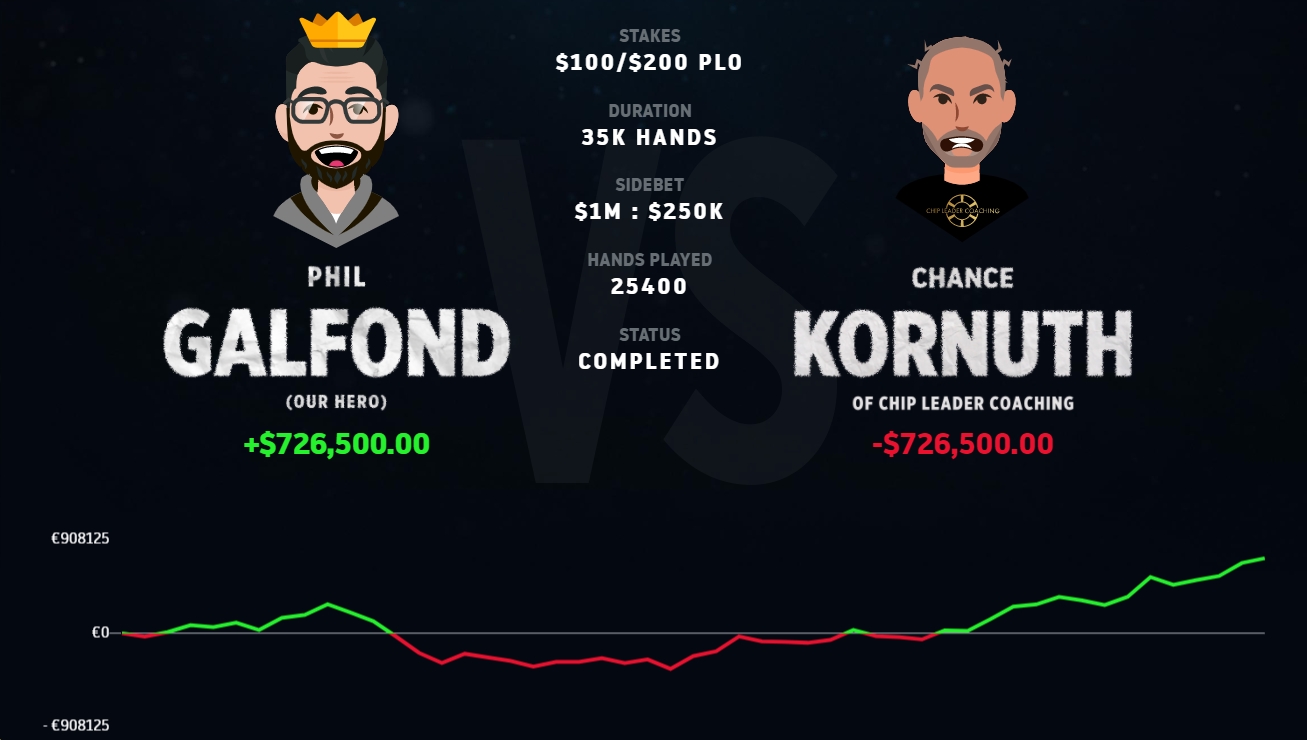 Phil Galfond has won his third challenge match after Chance Kornuth concedes. (Image: Run It Once)

The two pros had been battling back and forth since the end of 2020. Galfond stumbled at one point but established healthy lead in the early part of 2021.

With just under 10,000 hands left to play and the deficit standing at over $725,000, Kornuth decided that discretion was the better part of valor.

No Chance for Kornuth to Win

The start of the end came on January 23. Kornuth had lost $122,000 the previous day and needed a strong session to turn things around.

Unfortunately for him, Galfond proved too strong once again. With another $46,000 lost, Kornuth admitted that a comeback was only going to happen if he caught some serious heat.

Super tough day again vs Phil. Gonna need to catch some serious heat ? to have a shot at a come back

A moment of reflection clearly came over him after sending that tweet as, just a few hours later, he conceded.

I’ve decided to concede the challenge . Congrats to @PhilGalfond on another #GalfondChallenge Victory. It was an incredibly fun battle even though I lost. Going to take a few days w/ friends and family, and share more about my experience in the weeks to come on @ChipLDR

Galfond was, as ever, humble in victory. Never one to gloat, the American not only thanked Kornuth for the match but admitted he was pushed to his limits at times.

Indeed, as much as the matches are a chance for Galfond to win some money, his main reason for playing is the challenge.

After almost 5 months, 25k hands & $730k, another #GalfondChallenge is in the books.

I was very unpleasantly surprised by how well @ChancesCards played. He tested my game in ways no other opponents had, exposing weaknesses I wasn’t aware of, and I’m stronger now for it.

As well as being the owner of Run It Once, Galfond has won millions at the felt. In all likelihood, he doesn’t need to rely on income from poker anymore.

Because of that, the Galfond Challenge is a test. A chance for, arguably, the best internet player of all time to see if he’s still got it. Moreover, it’s a chance to learn some new skills.

It’s not the end for Kornuth. He’ll go away and lick his wounds before getting back to the grind.

Galfond, on the other hand, will add another $726,500 to his bankroll. However, he won’t be basking in the glory of his latest victory for long.

As well as an ongoing match with Bill Perkins, Galfond has other matches to focus on. Brandon Adams is waiting in the wings, as is Dan Cates.

Of those two, Cates presents the toughest challenge and one that Galfond can’t take lightly. There have also been calls for a match against Doug Polk.

Polk is currently battling Daniel Negreanu in a similar challenge. Fans now want to see the two champions square-off in a fight to the death.

Whether or not the two pros would play each other remains to be seen. However, even if they don’t, there’s plenty of action for railbirds to enjoy in the coming months.