The Michael Shermer Show (formerly Science Salon) is a series of long-form conversations between Dr. Michael Shermer and leading scientists, philosophers, historians, scholars, writers and thinkers about the most important issues of our time.

“I can go to my office and pick up a telephone, and in 25 minutes, millions of people will be dead.” —President Richard M. Nixon, 1974

The above quote from Nixon serves as the epigram of Martin Sherwin’s definitive history of the Cuban Missile Crisis, and as Dr. Shermer notes at the top of this conversation, Nixon’s pronouncement was no exaggeration. We still have a triad of nuclear weapons: (1) land (missiles), (2) air (bombers), and (3) sea (submarines). As the scientist David Barash calculates, a single Trident sub carries 20 nuclear-tipped missiles, each one of which has eight independently targetable warheads of about 465 kilotons, or about 30 times the destructive power of Little Boy. So one sub packs 20 × 8 × 30 = 4,800 Hiroshimas. We have 18 Trident submarines, so that is the equivalent of 86,400 Hiroshimas! In the words of President Obama during a briefing about our nuclear capability: “Let’s stipulate that this is all insane.” 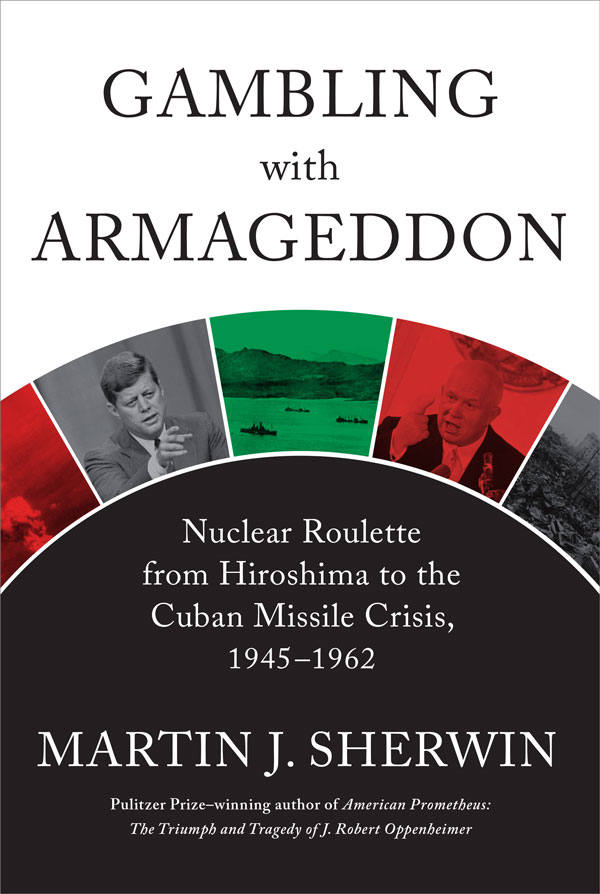 In this episode Dr. Shermer talks with Martin Sherwin, the Pulitzer Prize-winning author of American Prometheus: The Triumph and Tragedy of J. Robert Oppenheimer, about his new book Gambling with Armageddon, the definitive history of the Cuban Missile Crisis and its potential for nuclear holocaust, in a wider historical narrative of the Cold War—how such a crisis arose, and why at the very last possible moment it didn’t happen. Luck, coupled to reason and diplomacy, saved the world from thermonuclear war.

Sherwin not only gives us a riveting sometimes hour-by-hour explanation of the crisis itself, but also explores the origins, scope, and consequences of the evolving place of nuclear weapons in the post-World War II world. Mining new sources and materials, and going far beyond the scope of earlier works on this critical face-off between the United States and the Soviet Union—triggered when Khrushchev began installing missiles in Cuba at Castro’s behest—Sherwin shows how this volatile event was an integral part of the wider Cold War and was a consequence of nuclear arms. Gambling with Armageddon looks in particular at the original debate in the Truman Administration about using the Atomic Bomb; the way in which President Eisenhower relied on the threat of massive retaliation to project U.S. power in the early Cold War era; and how President Kennedy, though unprepared to deal with the Bay of Pigs debacle, came of age during the Cuban Missile Crisis. Sherwin also presents a clarifying picture of what was going on in Khrushchev’s Soviet Union.

As existential threats go, a nuclear exchange is second to none. Understanding how we dodged Armageddon in 1962 is vital for the future of humanity. This conversation explores those themes and more.

Martin J. Sherwin is George Mason University Professor of History and the author of Gambling with Armageddon: Nuclear Roulette from Hiroshima to The Cuban Missile Crisis, 1945–1962. His previous books include A World Destroyed: Hiroshima and Its Legacies and, with Kai Bird, American Prometheus: The Triumph and Tragedy of J. Robert Oppenheimer, which won the Pulitzer Prize for biography in 2006. He and his wife live in Washington, DC, and Colorado.

Some memorable quotes and facts discussed in the conversation:

Mutual Assured Destruction is the foundation of deterrence. Nuclear weapons have no military utility whatsoever, excepting only to deter one’s opponent from their use. Which means you should never, never, never initiate their use against a nuclear-equipped opponent. If you do, it’s suicide.

American military strategist Bernard Brodie on deterrence, from his book The Absolute Weapon:

Thus far the chief purpose of our military establishment has been to win wars. From now on, its chief purpose must be to avert them. It can have almost no other purpose.

Dr. Strangelove, in Stanley Kubrick’s classic Cold War film of that title: “Deterrence is the art of producing in the mind of the enemy the fear to attack.” Said enemy, of course, must know that you have at the ready such destructive devices, and that is why “The whole point of a doomsday machine is lost if you keep it a secret!”

Of the many times luck played a role in the Cuban Missile Crisis, one stands out above all the others: At the height of the tensions a Soviet submarine submerged off the Cuban coast was being harassed by a U.S. Navy surface flotilla, which was firing small depth charges, of the sort used in training exercises. It was not trying to destroy the submarine but rather in an effort to get it to surface. The submarine’s officers, however, believed they were under full attack; the U.S. military was unaware that this sub was equipped with at least one nuclear-tipped torpedo. Unable to communicate with its military leadership in the Kremlin and having been given permission to use its nuclear weapon in “dire circumstances,” two out of the three officers with launch responsibility voted to fire their nuclear torpedo at the U.S. fleet, believing that a war had already started. This would almost certainly have provoked a thermonuclear war. But the third officer, one Vasily Arkhipov, voted “No,” and so the Soviet submarine didn’t devastate a chunk of the U.S. Navy, the U.S. did not retaliate, and the world remained intact.

You play a vital part in our commitment to promoting science and reason. If you enjoy the podcast, please show your support.