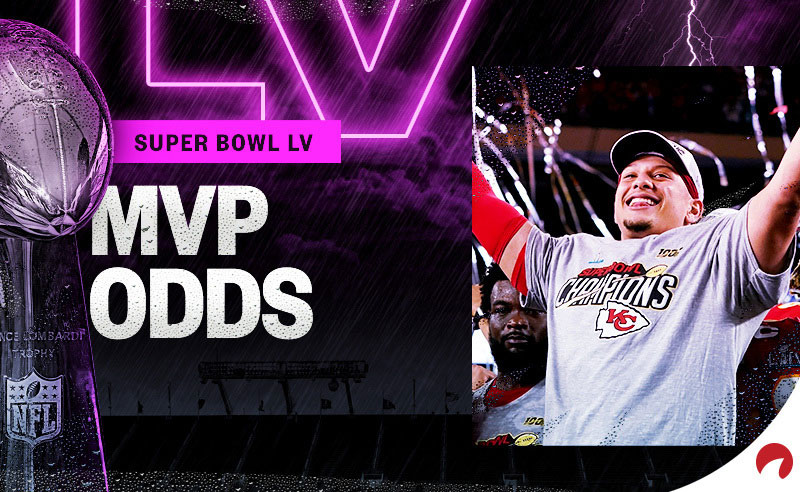 Being named the MVP of the NFL regular season is an extremely impressive honor, but if you ask any player in the league, they’d likely tell you that becoming Super Bowl MVP is a whole other level of prestige.

With the Tampa Bay Buccaneers set to take on the Kansas City Chiefs at Raymond James Stadium on February 7, odds are out on which man will be named Super Bowl MVP. Patrick Mahomes is the odds-on -120 favorite at Bovada, with Tom Brady (+200), Travis Kelce (+1000), Tyreek Hill (+1000) and Leonard Fournette (+2500) the next likeliest options at the book.

Our Super Bowl hub has everything you’ll need to handicap the big game. Looking for the sportsbook that’s right for you to get some money down on Super Bowl 55? Head over to our Where to Bet on the Super Bowl page.

Odds as of January 29 at Bovada

Mahomes, who a year ago was +115 to become MVP of Super Bowl 54 prior to the game, came through for bettors despite a mediocre performance by his lofty standards.

Mahomes finished the game completing 26 of 42 passes for 286 yards and two touchdowns along with two interceptions. But he came up huge when it counted the most, in the fourth quarter of Kansas City’s 31-20 victory over the San Francisco 49ers.

The Texas Tech product entered the Chiefs’ conference championship clash against the Buffalo Bills with some question marks surrounding his health, but he didn’t show any ill effects of the injury he sustained against the Cleveland Browns the previous week that sent him into concussion protocol.

Mahomes did battle through turf toe against the Bills, however, as his left shoe was equipped with a special carbon fiber orthotic. Mahomes’ mobility looked a tad limited vs the Bills, an issue that could once again arise in the Super Bowl.

Is Brady In Line For Another Super Bowl MVP Award?

Brady is back in the Super Bowl for the 10th time, but it’s his first trip to the big game as a member of the team representing the NFC. Brady is the only player in NFL history to have won four Super Bowl MVP awards. Joe Montana has won three, and three other quarterbacks – Bart Starr, Terry Bradshaw and Eli Manning – have won the award twice.

Brady’s Buccaneers held off a late charge by the Green Bay Packers in the NFC championship game, but the 43-year-old threw three interceptions in the second half of Tampa Bay’s 31-26 victory. He finished the game 20 of 36 for 280 passing yards, three TDs and three INTs.

That’s far from the type of stat line we’re used to seeing at this point in the postseason from Brady, but the future Hall of Famer has made a habit of showing up in the Super Bowl. At +200, he’s presenting excellent plus-money value given his wealth of experience in the championship game.

In Super Bowl 53, Julian Edelman became the seventh wideout to win the Super Bowl MVP Award. Quarterbacks have won the trophy 30 times, compared to seven times for running backs, four times for linebackers, and two times each for defensive ends and safeties.

A cornerback, a defensive tackle and a kick returner have each won the award once. Since Super Bowl 34 in 2000, quarterbacks have been the MVP 12 times.