The riverboat captain is a storyteller, and Captain Don Sanders will be sharing the stories of his long association with the river — from discovery to a way of love and life. This a part of a long and continuing story.

“The CLYDE is a fair boat. Take care of her.” Ed Newcomb

Over eight years ago, Captain Aaron Richardson sent a text message saying a small sternwheeler on the Upper Mississippi near Alma, Wisconsin, was available for purchase. Why did I need another boat? I already owned the SUN*FISH, a 48-foot custom live-a-board originally from Genoa, not far down the big river from Alma. But, what would it hurt to look? 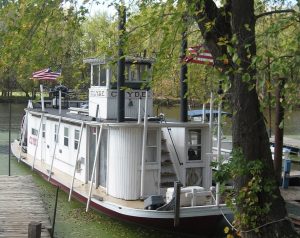 I was love-struck at my first glimpse of the paddlewheeler called the CLYDE.

Immediately, I was love-struck at my first glimpse of the paddlewheeler called the CLYDE, a home-built boat constructed in the backyard of Ed Newcomb along the eastern shore of Lake Pepin. Pepin, as river fans should know, is a natural body of water created eons ago from Chippewa River alluvium that partially-impounded the Mississippi River and created an immense, shallow lake known for its large, wind-formed waves. Cutting through these rollers was incredibly fun to do aboard the AVALON and the DELTA QUEEN on breezy days.

As I said, I didn’t need another boat, so my friend Everett “Ev” Dameron, a self-styled “boat nut,” admitted he was in the market for one and suggested that we look at the CLYDE together. In the month, or so, after I caught my first glimpse of a photo of the sternwheeler, and the day Ev and I drove to Alma, I’d been carrying on a lively correspondence with CLYDE’s builder, Ed Newcomb, a resident of Pepin, nestled along the lake.

Ed told of the era following the Civil War when logs cut from the great forest of first-growth Wisconsin White Pine in the state’s interior were floated down the Chippewa to Beef Slough on the Mississippi above Alma. There, armies of lumberjacks assembled the logs into rafts as long and wide as a 12-15 barge tow would be today. At first, the rafts relied on the river’s current and the muscular-might of the raftsmen to guide the logs to sawmills stretching along the shores as far south as St. Louis. Before long, steam replaced human muscles powering the rafts, and the age of the “Rafters” became an awe-inspiring chapter in steamboat history. 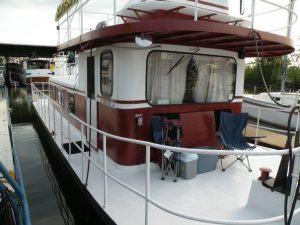 I already owned the SUN*FISH, a 48-foot custom live-a-board originally from Genoa, not far down the big river from Alma.

The first iron-hulled steamboat on the Upper Mississippi River was the CLYDE built as a sidewheeler in 1870, though rebuilt as a sternwheeler in 1875, at the Dubuque Iron Works, Dubuque, Iowa, under the supervision of the Scotsman, William Hopkins. Hopkins learned the shipwright’s art of constructing iron vessels on the River Clyde in his native country. This knowledge Hopkins carried to America, where he engaged in building iron gunboats for the Yankees during the bloody unrest between the states going on at the time. Once things simmered down after April 1865, Hopkins found his way to Dubuque and employed his trade at the local ironworks by the river. For his efforts in overseeing the building of the first metallic hull on the upper river, the resulting steamboat, named for the Scottish river upon which Mr. Hopkins learned his trade, became the CLYDE to honor the Scot. The last vessel construction Hopkins supervised for the Iowa Iron Works was the SPRAGUE, whose steel hull he rode into the water at its launch on 05 December 1901.

Knowledge of this information is essential to the story of the little paddlewheeler Ev, and I drove to Alma, Wisconsin, to inspect in May of 2012. Also important is that the boat’s builder, Ed Newcomb, had forebearers working aboard the Hopkins steamboat in positions of trust and responsibility during the time it was employed in the rafting trade until the piney woods fell before the lumberman’s ax. Ed’s grandpa Frank and great-uncles Isaac and Milt all served on the Steamer CLYDE that endured on the Tennessee River as a towboat until October 1941, when it was last commanded by Captain Tommy Utter, a steamboatman I had the privilege of working alongside on the DELTA QUEEN. As a salute to his illustrious forebearers who piloted and engineered the working raftboat CLYDE, Ed Newcomb built the smaller version of the rafter in his backyard on Pepin’s shores. 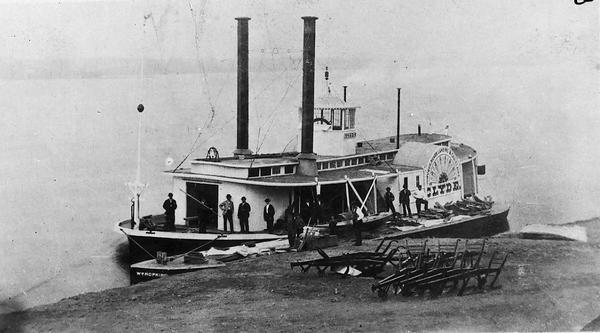 The first iron-hulled steamboat on the Upper Mississippi River was the CLYDE, a sidewheeler, built in 1870.

The steel hull for Ed’s interpretation came from a houseboat he scaled-down and added a raked stern with two “barn door” rudders making the replica riverboat as good a “flanking” sternwheeler as any on the river. The cabin, paddlewheel, pilothouse, stacks, and various exterior steamboat accouterments are as authentically-made as were those of the smaller boat’s namesake. Like steamboat builders in ages past, Ed had no plans or schematics to aid in the building. Nevertheless, he liberally employed Captain Alan L. Bate’s “The Western Rivers Steamboat Cyclopoedium” to guide his reproduction.

“The tricky part of the construction,” Ed confessed in the September 2004 edition of HEARTLAND BOATING, “was making sure it looked like an old boat. The book helped with that problem.”

Though my friend Everett originally intended to become the buyer of the latest version of the CLYDE, instead, I became the sternwheeler’s second caretaker on 17 May 2012. After an adventurous 30-day delivery trek from Alma to Aurora, the work began returning the little paddlewheel into better shape. With the help of a former deckhand from the GRAND VICTORIA II, we renewed better than half of the 1,000 pound White Oak sternwheel before the boat paddled away in October 2014 for the 100th Anniversary Celebration for the Steamer BELLE of LOUISVILLE at the Falls City. 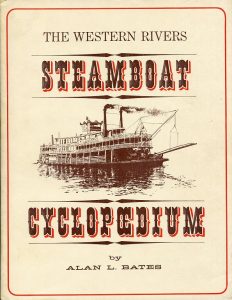 Other memorable trips were the two October “Licking River Rambles,” in 2015 and 2016, to the beloved river of my boyhood. During the autumn of 2017, the CLYDE missed a romp with the historic tug ELIZABETH LEA to the Kentucky River when serious leaks developed in the bow-thruster tunnel causing a move the boatyard that proved to be an adventure in its own right.

For the eight years under my stewardship, continual projects constantly improved the CLYDE as much as possible, considering my financial resources and skillsets. Eventually, Father Time tapped my shoulder and whispered into my ear:

“Say, old-timer, it’s time to start looking for someone else younger and, hopefully, richer than you to carry on.”

Seemingly out of nowhere, Dr. Julie Johnston from the Tennessee River, near Knoxville, appeared and relieved me of my duties as CLYDE’s keeper. After an arduous delivery trip of some 1,100 river miles, the CLYDE arrived safely at her new home, where she was quickly stripped of all her interior and now lays waiting, at this writing, for a new look.

Stay tuned for further developments… this story is far from over.

Captain Don Sanders is a river man. He has been a riverboat captain with the Delta Queen Steamboat Company and with Rising Star Casino. He learned to fly an airplane before he learned to drive a “machine” and became a captain in the USAF. He is an adventurer, a historian, and a storyteller. Now, he is a columnist for the NKyTribune and will share his stories of growing up in Covington and his stories of the river. Hang on for the ride — the river never looked so good. 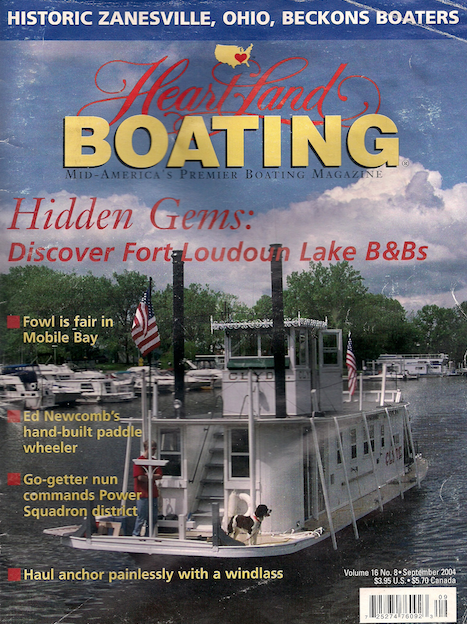 The September 2004 edition of HEARTLAND BOATING featuring the CLYDE. 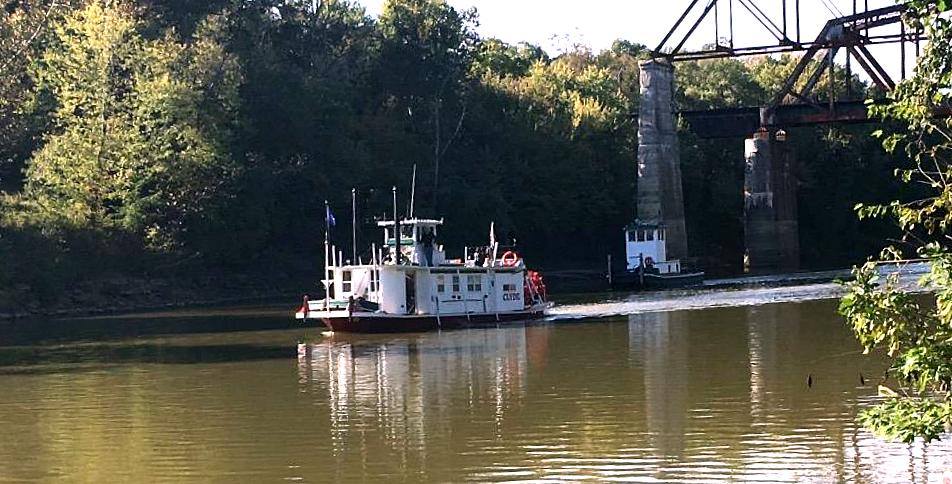 Other memorable trips were the two October “Licking River Rambles,” in 2015 and 2016, to the beloved river of my boyhood. (P. Richardson Photo) 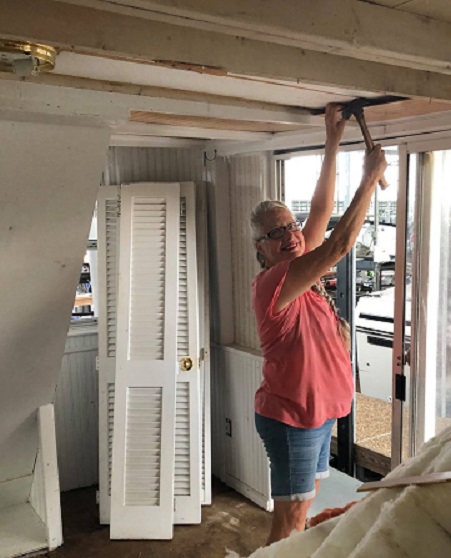 The CLYDE arrived safely at her new home, where she was quickly stripped of all her interior and now lays waiting, at this writing, for a new look.