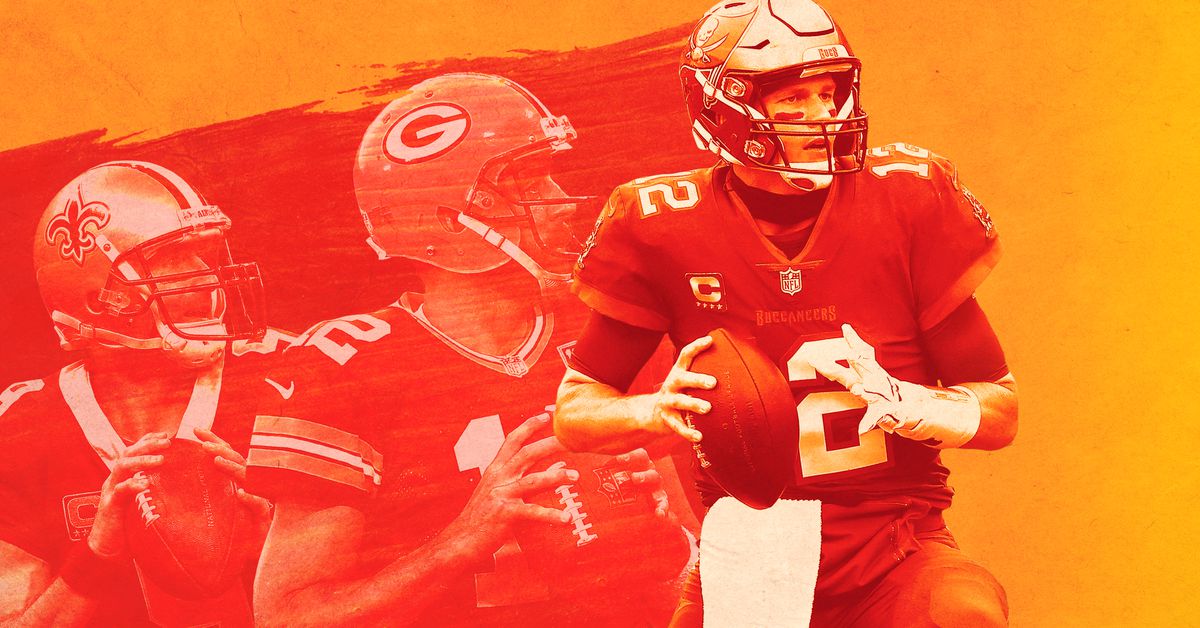 There aren’t many firsts left for Tom Brady, but if the Buccaneers win the Super Bowl, it will be the first time in his 21-year career he’s had to win three previous playoff games to do so. Brady never won a Super Bowl with the Patriots after playing on wild-card weekend, mostly because he rarely had to—he appeared in a wild-card game only four times in his 17 playoff appearances for New England. For a player whose career has been compared to a classic “hero’s journey’ in literature, the road of trials leading to Super Bowl LV was one of the steepest of his career: after knocking off the Washington Football Team in the wild-card round, Brady and the Buccaneers bested Drew Brees and the Saints, then Aaron Rodgers and the Packers. Their next opponent, Patrick Mahomes and the Chiefs, is a fitting final trial.

Brady’s hardest Super Bowl path by opponent winning percentage came in the 2004 season when the Patriots went through Peyton Manning’s Colts and Ben Roethlisberger’s Steelers before beating Andy Reid and Donovan McNabb’s Eagles to become champions. The gauntlet of Brees, Rodgers, and Mahomes would arguably be a more impressive accomplishment, should Brady and the Bucs make their way through it.

Brady is playing to keep as much distance between his own legacy and Mahomes’s developing one as he can. If the Chiefs beat the Buccaneers, the 25-year-old Mahomes will have evened his personal playoff record against Brady (it would be 1-1), and he and Kansas City will be one ring closer to the six that Brady and the Patriots won together. The Chiefs would also be the first back-to-back Super Bowl champion since the Patriots did it in the 2003 and 2004 seasons. Some of Brady and New England’s seemingly uncatchable records would be reasonably in sight. For all of the dynastic implications of this game, Kansas City is the favorite—it has the better roster and the better quarterback.

“If it was a throwing contest, hell yeah, he’s going to get it,” Bucs coach Bruce Arians said of Mahomes last Thursday. “But, there’s a lot of things that happen in different seasons and what Tom has done is historic.”

In the hero’s journey, there’s a stage the hero has to go through that’s called apotheosis. This is when knowledge, a greater understanding, and perceptiveness is achieved. It can give the hero immortality, or it can simply prepare them for the greater challenge that lies ahead. This Super Bowl matchup has a mythic quality to it in part because it pits a player with superior physical tools, Mahomes, against another, Brady, who’s clearly passed through apotheosis. We get to find out which trait winds up mattering more.

More broadly, Brady’s entire season in Tampa makes him seem omniscient. You’ve got to hand it to the guy: He navigated his New England departure via free agency, then picked a destination where he felt he’d connect with the coaching staff and where there was a roster he saw as ready to compete for a Super Bowl. It was a reasonable assessment—Arians is known as a relationship cultivator, and Tampa has a good, young defense and skill position players like wide receivers Mike Evans and Chris Godwin that most quarterbacks would love to play with—but the Bucs were no sure thing. Before this year, they hadn’t won a playoff game since 2002, and they went 7-9 last season with most of the same players. Brady’s presence has had a galvanizing effect on the franchise, even after COVID-19 made the adjustment period more difficult.

Part of Brady’s interest in Tampa stemmed from a belief that he’d have more say in personnel decisions—the contracts awarded Antonio Brown and Rob Gronkowski indicate he was right in that, too. Other than a seventh Super Bowl ring, Brady has gotten everything he wanted.

There was a time—as recent as 2019—when Brady did not want to leave the Patriots. He was never anything but clear-eyed about Bill Belichick’s preference to move on from players once their performances started to lag, or when their contracts became unwieldy, so he knew it wasn’t a foregone conclusion that he would finish his career in New England. However, when he sought a contract extension in the 2019 offseason, Brady was initially hoping for a several-year deal. Belichick, unwilling to commit long term to a quarterback in his 40s (or to pay a top-of-market-value salary, for that matter), did not want to go that far and suggested a shorter contract running a couple of years. Brady declined that offer and went the opposite route, signing what was effectively a one-year deal with a no franchise tag clause, ensuring he’d hit free agency in 2020 for the first time in his career. He would have liked to stay with the Patriots and finish his career with a happy, neat ending. That goal, though, was superseded by a stronger impulse: to keep playing and keep competing for as long as possible. So far, Brady has gotten that, too.

“It just ended up being a great fit and as it’s played out, I’ve just thought, ‘Wow, this has really been a magical year,’” Brady said Thursday. “For me as a player to switch teams, that takes a lot. To move my family, to go to a different conference, to keep building the way we did and develop a rapport with the guys that we have here—so much of football is about the relationships that you get with your teammates [and your] coaches. The fact that we’re still playing feels really good for me.”

Brady is peerless in terms of lasting success for an NFL quarterback. After one season in Tampa, he’s won as many NFC championship games as Brees or Rodgers. Mahomes represents a different challenge, though. In his first year in the NFC, Brady was mostly pitted against his fellow elder statesman quarterbacks. Picking off Brees and then Rodgers is impressive, but Brady had already clearly dominated their shared era. In the AFC he left behind, young quarterbacks like Josh Allen, Lamar Jackson and Mahomes seem poised to control that conference for a long time, creating a new set of achievements that will inevitably be compared against Brady’s. Brady’s success in Tampa isn’t as much of a referendum on his time with Belichick as it’s being made out to be, but Brady and Belichick acolytes should be united in the fight to preserve their advantage for as long as possible against a Chiefs franchise hoping to take a run at several of their shared records

When the Patriots drafted Brady in 2000, he couldn’t point to Foxborough, Massachusetts on a map. The phone finally rang and, when Brady picked up, he learned he’d been chosen by New England and wondered where, exactly, New England was. His confusion was compounded when he flew to his new home for the first time and landed not in Boston but in Providence, Rhode Island (Rhode Island is like Massachusetts but dressed as Connecticut). He knows more than that now.

The point of Tom Brady is not to never lose, it’s to never stop. To never go away. To always, eventually, have the right answer. Getting down 28-3 to the Falcons was not a good thing, it was just a circumstance that wound up not mattering. Struggling for portions of this season with receivers he didn’t know and a high-variance defense of players he’d never met wasn’t what Brady and Tampa wanted to happen, but it may not matter that it did.

In a classic hero’s journey, the journey ends when the hero returns home. Brady switched teams, in some ways diverging from the form. The journey, to him, is not over. And that’s how he prefers it.