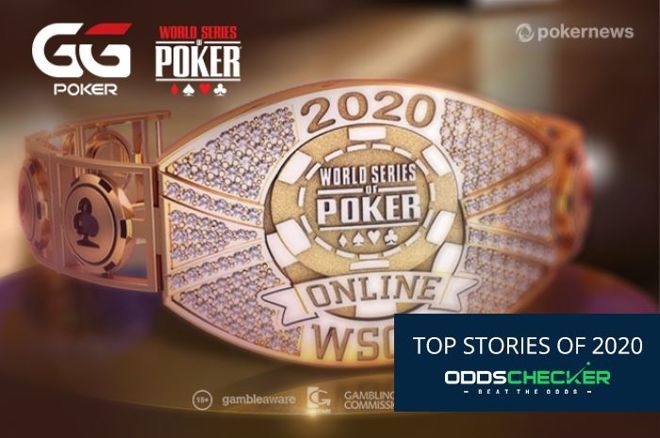 This year’s Top Stories are brought to you by Oddschecker US.

Visit OddsChecker to get instant access to the latest odds, tips and exclusive offers thanks to their all-inclusive sports-betting portal.

Whether you like football, basketball, baseball, hockey, soccer and more, OddsChecker is your one-stop-shop to get always the best odds. Check out Oddschecker US today!

The year 2020 has been a wild ride with many unexpected things happening along the way. However, few could’ve predicted the meteoric rise of GGPoker, which rose from credible challenger to frontrunner status in the span of mere months.

With the regular World Series of Poker initially postponed, and later canned save for the Main Event, the rising site quickly swooped in to create an unprecedented online series in conjunction with the WSOP. The result: a jam-packed 85-bracelet event schedule, with 54 of them played out on GGPoker throughout the summer.

While this two-month online extravaganza was bonkers in the aggregate, none captured the big-event feel as much as the WSOP Online Main Event which came with an astonishing guarantee of $25,000,000 for a buy-in of just $5,000. It was a proposition unheard of in the online realm — up until then, the record holders were partypoker with their $21,780,000 prize pool in the MILLIONS Online Main Event at the tail end of 2018.

Even with the pandemic forcing people into their homes and rediscovering online poker — resulting in a massive boon not seen since the days before Black Friday — the premise was outright insane. The event needed 2,500 runners just to break even, and to raise the difficulty bar further, only three buy-ins were allowed as opposed to unlimited reentries.

But GGPoker and the WSOP delivered in a big way. Over the course of two weeks and 23 starting flights, they achieved the improbable and smashed the guarantee. When all was said and done, 5,802 entries were made to create a prize pool of $27,559,500, by far the largest-ever in online poker history and officially recognized by Guinness World Records.

On Sept. 6, Stoyan Madanzhiev made history by winning the largest prize awarded in online poker history: $3,904,686. Runner-up Wenling Gao cashed for $2,748,605 — needless to say, the second-biggest prize — and the event crowned four new millionaires. Madanzhiev touched extensively on it in the PokerNews Podcast and sent out the following tweet shortly after victory.

Congrats to Stoyan Madanzhiev for winning the WSOP Online Main Event and $3,904,685, the largest 1st place prize in… https://t.co/aP1b2Pi8EM

Having online events at the World Series of Poker isn’t new. In 2015, the first one was successfully deployed on WSOP.com, and ever since then, the digital schedule has expanded. From three events in 2017 and four in 2018, a total of nine graced the 2019 schedule and even more were planned for 2020 until the plug was pulled.

“We felt like the WSOP Online was truly historic. It deserved to be treated that way.”

However, coming up with a full online schedule was something else. Eventually, the WSOP settled on 31 events on WSOP.com for those in Nevada and New Jersey, and 54 on GG’s international client.

“We felt like the WSOP Online was truly historic,” said Steve Preiss, GGPoker’s head of poker operations. “It deserved to be treated that way.”

Preiss explained that the $25M number was in their head from the start.

“There wasn’t a lot of internal debate about setting a guarantee for the Main Event or even what that number should be,” he told PokerNews. “Yes, our team did the analysis, but the $25M number was a figure we all had in our gut and the analysis backed that up.”

One might expect that such a lofty, unprecedented goal would result in quite a few sleepless nights. Even with the numbers in their corner, GGPoker could potentially be on the hook for millions if the WSOP Online would end up being a colossal disaster.

Preiss, though, was comfortable right off the bat, even after the initial night came up with several challenges of its own.

“After we set the guarantee, we felt very comfortable that the community would support it and we’d get there. Not that there weren’t moments of doubt along the way – that’s natural — but the poker community really got behind the WSOP Online from Day 1. Ultimately, credit goes to them. We could not be more grateful for the support.”

One of the players who was on fire throughout the WSOP Online — both on WSOP.com and on GGPoker — was eight-time Circuit ring winner Michael Lech. For Lech, it became a summer to remember as he finally captured his first gold WSOP bracelet during the American portion back in July to add the coveted prize to his accolades. “miguelfiesta” then jumped on a plane to travel to his beloved Mexico to continue the grind on GGPoker.

After the earlier windfall on WSOP.com, Lech made a deep run in the WSOP Online Main Event to ultimately bow out in 31st place, receiving $55,880. Lech looks fondly back at the experience of being part of history.

“It was a very fun tournament,” he said about the big one on GGPoker. “I played it twice and had won a satellite entry both times. I was a little too passive on my first go around and just decided to go crazy on the second one, and it worked! Day 2 started off hot near the bubble so was a very fun position to be in with lots of chips getting to open any two cards. It definitely had a different feel than other online tournaments.”

That feel manifested itself in snugger play overall, especially on the Day 1s.

“There were a lot of satellite players, I think, and just the magnitude of a WSOP Main Event plus the $5K buy-in is a lot for any player,” said Lech, who observed that his earlier bracelet win had him locked in for this run. “Moving deeper in the tournament, people opened up their game for sure but still, was a lot of fun.

“Confidence in yourself is one of the biggest components of this game.”

While the $25M guarantee might’ve been an ambitious idea, the poker community — including the likes of Lech, who traveled to Mexico for it — showed up in a big way and blew past it to eventually create the aforementioned prize pool. GGPoker decided the achievement should be commemorated and started the process to get Guinness involved, providing them the supporting historical numbers and evidence.

“While the record itself goes to GGPoker, from our perspective it belongs to every player who supported the Main Event and the WSOP Online this summer.”

“They validated and verified it and awarded us the record,” Preiss said about being inked into the record books. “While the record itself goes to GGPoker, from our perspective it belongs to every player who supported the Main Event and the WSOP Online this summer.”

“Breaking a Guinness World Records title shows what happens when you combine GGPoker’s amazing platform with the World Series of Poker brand,” said WSOP Director Ty Stewart back in October. “This will be a tough record to beat.”

The achievement was announced by GGPoker ambassador Daniel Negreanu in below’s video.

Which Record Will GGPoker Chase Next?

Needless to say, it’s been a monstrous year for GGPoker which will be heavily outlined in one of the subsequent Top Stories of 2020. The WSOP Online wasn’t the only record to be shattered as high-stakes cash action returned to levels that haven’t been seen since the glory days on Full Tilt Poker with the likes of Tom “durrrr” Dwan, Viktor “Isildur1” Blom and Patrik Antonius.

With records in tournaments and cash games broken, what’s next for the site?

With vaccines against the coronavirus slowly but surely being administered to start the return to poker normalcy, perhaps new heights will be reached in the live department as well. It’s still a guessing game at this stage, as Preiss remains tight-lipped about which record-breaking feats are being cooked up.

“Everyone at GGPoker is all in. People here love poker.”

“While we certainly can’t tip our hand just yet, it’s safe to assume our development team is constantly progressing new product features,” he said. “But at the end of the day, we’re a tech company at heart and we remain focused on delivering the best product to the market, and features like our integrated staking showcase this. It’s a big reason why GGPoker got to where it did so quickly,” Preiss said.

“Everyone at GGPoker is all in. People here love poker. We want it to be inclusive to all and reach new audiences.”

Lech is hoping that whatever big event GGPoker is planning next, it doesn’t evolve into an uncapped reentry-fest but retains limited entries. “If they run another large event, I am all for the limited entry or freezeout day 1’s to keep the players with unlimited bankrolls from having the edge to get stacks earlier on,” the bracelet winner said.

“I would be happy to travel back to Mexico in the future to play more on there.”

With GGPoker’s innovative software in constant development, Preiss was willing to share fresh information about one of the new innovative features coming up, called GGCare. The upcoming feature rolls out on Jan. 1 and will give back to those that have suffered nasty beats at the tables. GGPoker has high expectations for this new feature.

“From a more customer-focused perspective, we will always look to expand the reach of poker and bring more new players into the game. With GGCare, our system analyzes the outcomes of hands played at cash game tables, and if it’s determined that a player has had some bad luck — such as suffering a nasty bad beat, suckout or cooler — they’ll be rewarded awarded with automatic registration into a $30,000 tournament running the following day,” Preiss said about the new feature.

“The unluckier the player is, the more chips they’ll have in the tournament.”

Lech is a fan of the ever-developing software and is looking forward to any future innovations. “I really enjoyed the emojis and chatting that went on GG, it was unique and created a fun time. The SnapCam also! I started using that even deep in the Main Event, it made for a lot of fun.”

And while GGPoker has been setting the bar with software innovations and the record-breaking tournament as the big eye-catcher, other sites haven’t been sitting on their hands and are developing their offerings as well.

If there’s one big winner in all of this, it has to be the poker community. With records shattered after such a monstrous year for online poker, as well as more and more options to take their business towards, the future is shining brightly for those who love the game.

Facts and Figures of the GGPoker WSOP Online Main Event

Oddschecker US is 100% free to use. Get the latest odds from some of the most trusted brands in the industry, with promotions and betting tips to help you pick winners!