More action to look forward to at UFC Apex in Las Vegas. There are three fights on the card and we have looked at the odds for the anticipated Blaydes vs Volkov fight. We have pulled the stats of each of the fighters to analyze and postulate on who is most likely to walk away victorious. Of late the UFC fights have been very much up in the air or close calls. It may be the hiatus everyone had because of the worldwide shutdown due to the Covid-19 outbreak. It seems some fighters got rusty and some may have used the break to train harder.

Naturally it is putting a spanner in the works for most bookmakers since it’s harder to predict outright winners. We think it makes betting even more exciting. Find out who has the best odds of winning and what wagers you should be making. As we explore the possibilities of  fight outcome below. 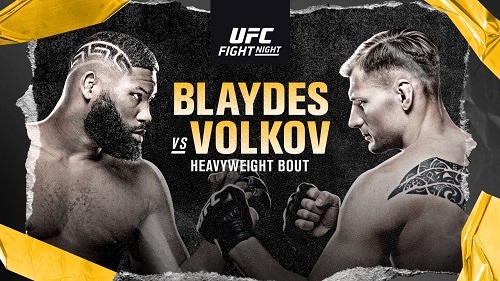 Curtis Blaydes ranks third while Volkov ranks seventh. Blaydes has already declared that he will beat his opponent in under five rounds. Well, if the Deontay Wilder vs Tyson Fury fight is anything to go by its always better not to make such sweeping statements as they almost always seem to come back to bite.

Although it would seem that Blaydes has a better chance judging from his record of winning through knockouts. Just over 62% of the American’s fights have been won via knockouts compared to Russian Volkov’s 52%.

The Russian has had 38 fights in his professional career and has a total of 81.5% of all his fights. Curtis Blaydes pro career is only 16 fights deep and his record is 81.2% victories. None of Blaydes’ fights have gone beyond three rounds so most sportsbooks have pegged him as the favorite.

However, it seems of late the underdogs are upsetting what the bookies have laid out. For instance, last week’s UFC fight night, most sportsbooks had Jessica Eye as the favorite and yet her opponent manged to come out victorious.

This fight seems to close to call. Try not to bet on outright wins, rather bet on prop bets. Focus on betting on whether the winning fighter will win by decision, knockout or submission.