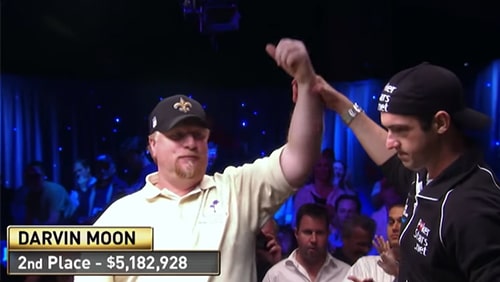 It takes a lot to win a World Series of Poker Main Event, but while it’s often said that no-one remembers the runner-up, that doesn’t apply to the man who lost the heads-up battle in 2009. While Joe Cada celebrated becoming the youngest ever winner of the Main Event aged just 21, Darvin Moon was almost as fondly remembered as the winner himself. This weekend, the poker world mourns a man who was as friendly as he was almost unsuited to the era of poker he had a hand in ushering in.

In the early hours of Sunday morning, Poker Night in America developer Todd Anderson broke the sad news that Darvin Moon passed away, at the age of just 56 years old.

The best person I ever met through poker is Darvin Moon. A man of integrity and honor. And quite possibly the most interesting person I’ve ever known. Truly. He and his wife Wendy became good friends. Sadly, Darvin succumbed to complications from surgery today. He’ll be missed. pic.twitter.com/oq0DmL74Jk

Passing away so young, Darvin Moon was much-loved as a man more than he ever was as a poker player, to his unending credit. Many poker players who win millions out of nowhere often give plenty of their game-gotten gains back to the industry, almost out of a perverse sense of winner’s guilt, as if they didn’t ‘earn’ it as much as others. There wasn’t a bit of that with Darvin Moon. He knew his fortune had overmatched his not inconsiderable poker prowess. He’d maximised his poker ability on the greatest stage of all and wasn’t about to give it all back.

To all intents and purposes, Darvin Moon walked away from poker a long time ago, safe in the knowledge that his legacy was as untouchable as it was impossible to improve upon.

Moon gave so much to fans back in 2009. Friendly, amiable, hopeful, in many ways he epitomised the poker player who came before a certain type who walked into the gap created when players like him vacated the game. Game Theory Optimisation wasn’t Darvin Moon. Push/fold charts weren’t, either. Moon was a flag-bearer for playing poker by instinct, feel and from the gut. That may not be the optimal method in terms of making profit, but he made friends, got lucky and made millions by playing with his real-life personality laid bare at the poker table. Few can say they’ve achieved that.

Darvin Moon is survived by his wife Wendy but he will also always be remembered by a poker industry who fondly recall his run to the final duel of a historical World Series of Poker that will never be forgotten. The World Series of Poker paid tribute to a player who Greg Jennings on Twitter rightly called ‘The ultimate recreational poker player”.

Thanks for the memories Darvin moon. You inspired so many people and starred in one of the most memorable final tables in WSOP history. We will never forget. Rest In Peace. pic.twitter.com/QHDArJLDyh

Darvin Moon may be gone, but his legacy in the game of poker will live on as long as people enjoy watching the game and enjoying the characters who make up the cast of the most dramatic moment. Darvin Moon will always be one of the central players in the dramatic history of poker. We at Calvin Ayre hope he rests peacefully and will always remember this magical moment in World Series past.